God Put You There?

“Paul, a servant of Christ Jesus, called to be an apostle and set apart for the gospel of God – the gospel he promised beforehand through his prophets in the Holy Scriptures regarding his Son, who as to his earthly life was a descendent of David, and who through the Spirit of holiness was appointed the Son of God in power by his resurrection from the dead: Jesus Christ our Lord.” (Romans 1:1-4)


One of the common clichés used in Christian circles is the authoritative phrase: “God put me there.” Whether one is working at the hospital, teaching in a school, serving in the government office, joining a culinary school, or going on a mission, if one is a Christian, the sure way to spiritualize our jobs is to simply say: “God put me there. It is my calling.”


Who am I to judge? How can I, who have never seen that doctor receive a vision on one morning out at a walk? How would I know that God had appeared to the school teacher the other day, when she was praying? How could I doubt the chef who reported some strange feeling in his heart while choosing some ingredients? Can I really question the calling of a missionary?

These famous four words offer some divine authentication to make one feel better about it all, regardless of how one discerns his or her calling. In a sense, it is true that one is put in a particular vocation for a reason. On another angle, what if the job turns ugly for whatever reason, are we going to blame God for “putting us there?” Have we misheard God’s call in the first place? Are we wrong to say “God put us there?”

"Let your speech be always with grace, seasoned with salt, that ye may know how ye ought to answer every man." (Colossians 4:6, KJV)

#1 - It's not what you say but how you say it that makes all the difference.

#2 - What good will it be win the argument but lose the relationship?

#3 - Listening is the first step to understanding and the visible posture in humility.

#4 - Ask questions not to find loopholes to manipulate but to find opportunities to encourage.

#5 - Learn to see the spirit of the law instead of the letter of the law. 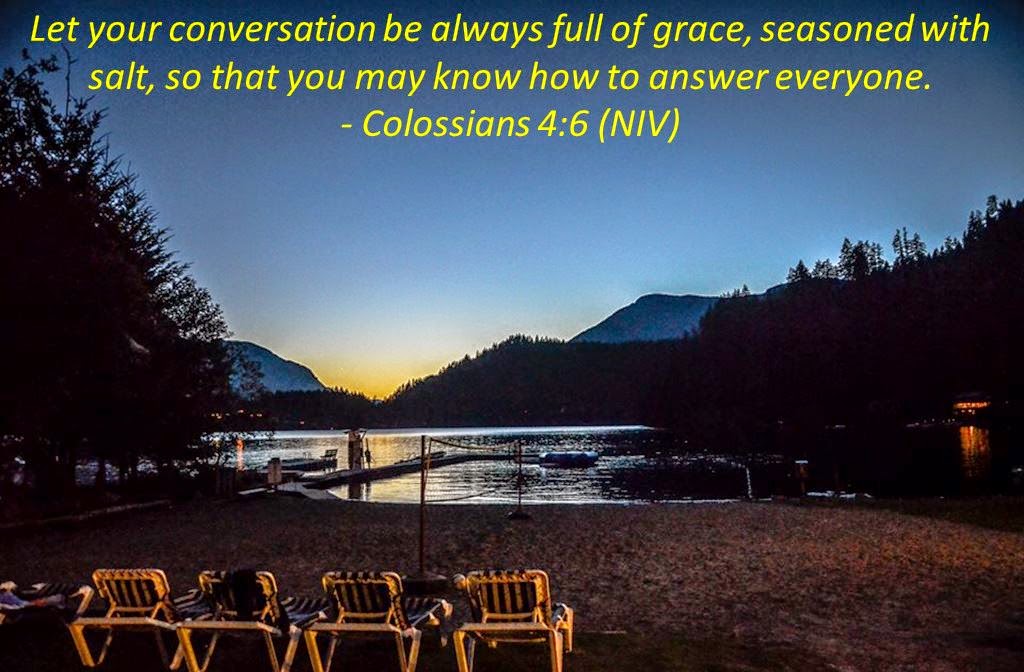 Read more »
Posted by Sabbath Walk at 9:58 PM No comments:

Christianity has an increasingly negative image problem. This is easily felt in the West, especially in North America. For Europe, the Christian influence has largely been erased from the minds of ordinary people. Even the ancient artifacts and grand structures of Christendom in Europe wow mostly visitors to Europe. In a post George W Bush era, I sense an even greater negativity against anything Christian in many parts of America and Canada.

Just this week, I read of a graduate from Trinity Western University, a private institution that is openly Christian, being rejected from a Norwegian company because she was deemed "unqualified." The rejection email was followed by sneers and jeers about her school, her God, and her faith. It is not only the rejection, but the harsh negativity of the prospective employers who claimed that it was Christianity that destroyed their culture. Feeling hurt and discriminated against, the plucky Bethany Paquette filed a complaint with the BC Human Rights Tribunal. I hope justice will be served as Paquette certainly does not deserve being ridiculed personally or her faith being lampooned foolishly.

As I think about it, her case is not alone. There is a particularly high animosity against evangelicals or anyone standing up for their Christian beliefs. Why are Christians being labeled "bigots," "homophobes," "intolerant," "judgmental," "anti-abortion," and all kinds of nasty names? In fact, some of the most ferocious voices against Christianity are formerly from Christian backgrounds. People like John Loftus, who was formerly a Christian minister, but is now a forceful opponent against Christianity. He is the founder of the anti-Christian blog named, "Debunking Christianity." A fellow alumni of mine had debated him, even wrote a book together with him to ensure that both views are represented. You can read my review of "God or Godless" here.

How should Christians deal with negativity? One way is to do a frontal assault by direct debate and argumentation. You have apologists like Ravi Zacharias International Ministry, William Lane Craig, Josh McDowell, Norman Geisler, CS Lewis, Alister McGrath, and many who can do that. Others like John G Stackhouse will adopt a "Humble Apologetics" format. Another way is to simply ignore the accusations and avoid any forms of confrontation. For me, there is no fixed way to deal with angry attacks. It is one thing to win arguments. It is yet another to win over the person.

I wrote the following yesterday in order to suggest a 3L approach in dealing with negativity. I list them below for your reading.

39Jesus went out as usual to the Mount of Olives, and his disciples followed him. 40On reaching the place, he said to them, “Pray that you will not fall into temptation.” 41He withdrew about a stone’s throw beyond them, knelt down and prayed, 42“Father, if you are willing, take this cup from me; yet not my will, but yours be done.” 43An angel from heaven appeared to him and strengthened him. 44And being in anguish, he prayed more earnestly, and his sweat was like drops of blood falling to the ground.

One of the things I observed about Christians' behaviour is the use of divine power in the midst of heated arguments and controversies. Different groups would regularly pray that God's will be done, but I wonder how many of them are more inclined toward asking for "their will" to be done instead. This week, I reflect on two current events and look at ways we can pray. With increasing submission and decreasing manipulation of course. Otherwise, we will be guilty of manipulating God to turn people against people.

Read more »
Posted by Sabbath Walk at 4:50 PM No comments: