“The people walking in darkness have seen a great light; on those living in the land of the shadow of death a light has dawned. ” (Isaiah 9:2)

The lights are on. The decorations are up. The music is swinging. 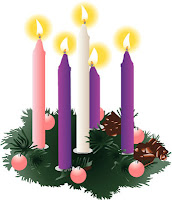 Christmas is coming. Each December, cities all over the world are gearing up to gradually close out the year. The song, “We Wish You a Merry Christmas” ends with a “Happy New Year.”

Christmas is coming. For the Christian, the celebration of Christ’s birth begins not on December 25th, but commences four Sundays before. Called the Advent month, for four Sundays, pulpits around the world will be preaching sermons about Christmas and the birth of Christ. It is a happy event, a joyous celebration of God born a baby and also a king.

The word “advent” comes from the Latin adventus, which also means “arrival,” or “coming.” It reminds us of John’s gospel that famously says,

“The Word became flesh and made his dwelling among us. We have seen his glory, the glory of the One and Only, who came from the Father, full of grace and truth.” (John 1:14)

There are three significant things about the Advent. All of them stresses the coming of Christ, namely, the past, the present, and the future. It has been said that the Advent is essentially the NEW YEAR for the Christian. In other words, Christmas Day is the month long culmination of the Coming of Christ. In the Church I serve here in Vancouver, we do a traditional candle lighting ritual. For four Sundays in a row, we light candles one by one as follows:

We use different colours to represent the candles. For hope, peace, and joy, we use purple to symbolize Christ’s royalty as King. For love, we use the rose or pink coloured candle to represent Christ’s love and faithfulness. For the Christ candle, white is used to symbolize purity.

There is one more thing that is significant about the Advent season. For the Christian, the Church calendar officially begins on the first Sunday of December. In order words, Christians should be saying to one another “Happy New Year” already. One Jewish Rabbi likes to poke fun at Christians who do not know their own religious significance. On the first day of the conventional January 1st New Year, he likes to go around and wish his Christian friends, “A Happy Secular New Year to You.”

He is right. Too many Christians have been observing secular events more than their own events. For that matter, Sunday is in a sense ‘secular’ as the day has often been attributed to the pagan sun-god during the time of Constantine. In 321 AD, after the Roman Emperor Constantine converted to Christianity, the day “Sunday” became the day where work is stopped and leisure began. That is why there is often a confusion among some Christians and Jews on when actually is the Sabbath. Is it still the traditional Friday/Saturday Jewish Sabbath or is Sunday the new “Sabbath” for Christians. For me, Sunday is essentially the Lord’s Day. The Sabbath is the Jewish day of rest. Christians are not compelled to observe any one specific day like the Jews to stop doing anything. They are strongly urged to take some form of a sabbatical rest as a way to remind themselves of their calling as participants of the Kingdom of God. Understood in this way, every day can have Sabbath moments.

In other words, for Christians, last Sunday (Dec 2nd, 2012) is the start of the Christian New Year.

C) The Candle of Hope

I preached on the “Prophecy of True Light” on the first Advent Sunday, based on the text of Isaiah 9:1-7. In it, I lamented on the tragedy of Claus-mas, where our Western culture is increasingly more open and more embracing of all things Santa Claus, and more hostile and dismissive of the Person of Jesus Christ. From movies to songs, Christmas shopping to  year end dancing, the big red costumed bearded men evokes more squeals and delights from both children and adults by society in general.

Don’t get me wrong. I am not bashing Santa Claus. I am lamenting the diminishing platform for the Christ-child. People are fast getting rid of anything that is religious. A few years ago, one poor Christmas tree became the controversial tree to be removed from a Toronto courthouse simply because the judge feels that it is too “religious” for secular comfort.

Light is a significant symbol during the Advent Season. Christ is the Light of the world. The people of Israel walking in darkness has seen a great light. This light has not only revealed itself, it has come to the people. The light is a coming glory, not a distant sight. It is a fulfilling prophecy, not just a fulfilled event in history. For the Advent is a remembrance of the light having come, the light has come, and a light that will be coming again. That is the significance of the Advent.

My friends, how are you celebrating the Advent season? When we carve our Turkeys, or budget our money for Christmas shopping, remember why we are doing it. When we give toys and distribute gifts to the needy, remember in whose Name we are doing it for. When we send Christmas and holiday greetings to friends and loved ones, remember the reason for the season.


Copyright by SabbathWalk. This devotional is sent to you free of charge. If you feel blessed or ministered to by SabbathWalk weekly devotionals, feel free to forward to friends, or to invite them to subscribe online at http://blog.sabbathwalk.org . You can also send me an email at cyap@sabbathwalk.org for comments or enquiries.