A Good and Perfect Gift

12Blessed is the one who perseveres under trial because, having stood the test, that person will receive the crown of life that the Lord has promised to those who love him. 13When tempted, no one should say, “God is tempting me.” For God cannot be tempted by evil, nor does he tempt anyone; 14but each person is tempted when they are dragged away by their own evil desire and enticed. 15Then, after desire has conceived, it gives birth to sin; and sin, when it is full-grown, gives birth to death. 16Don’t be deceived, my dear brothers and sisters. 17Every good and perfect gift is from above, coming down from the Father of the heavenly lights, who does not change like shifting shadows. 18He chose to give us birth through the word of truth, that we might be a kind of firstfruits of all he created.


Patrick won the jackpot. Alice struck the lottery. Michael received the first prize in a lucky draw. With the winnings, all of them rejoiced. All of them claimed to have been blessed. All of them said that the good fortunes were all gifts from God. With glee, they promised to give a tenth of what they had gained to either a Church, a charity, or some kind of a Samaritan initiative. Of course, we can debate about whether Christians ought to gamble or buy lottery, but that is not the point today. the point is, what constitutes a "good and perfect gift?"


"27So then, whoever eats the bread or drinks the cup of the Lord in an unworthy manner will be guilty of sinning against the body and blood of the Lord. 28Everyone ought to examine themselves before they eat of the bread and drink from the cup. 29For those who eat and drink without discerning the body of Christ eat and drink judgment on themselves. 30That is why many among you are weak and sick, and a number of you have fallen asleep. 31But if we were more discerning with regard to ourselves, we would not come under such judgment. 32Nevertheless, when we are judged in this way by the Lord, we are being disciplined so that we will not be finally condemned with the world. 33So then, my brothers and sisters, when you gather to eat, you should all eat together. 34Anyone who is hungry should eat something at home, so that when you meet together it may not result in judgment. And when I come I will give further directions." (1 Cor 11:27-34) 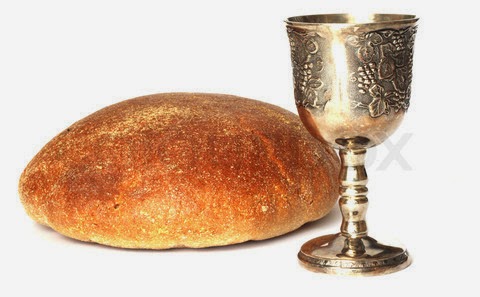 One of the most (if not the most) important sacraments in the liturgical calendar is the Holy Communion, also known as the Lord's Supper. If you are Roman Catholic, you would call it the Eucharist or the Mass. Regardless of the differences in theological opinion, all if not most will agree of its spiritual significance. You may be a Roman Catholic who believes in the real transformation of bread and wine as the physical Presence of Christ.You may be a Lutheran who may not agree with the RCC version's of "transubstantiation," but in the local transformation of bread and wine into the body and blood of Christ. You may be a Reformed who sees the Lord's Supper more as symbolism or a Baptist who argues that Christ's presence may not be physical but sure is real. You may also be a Pentecostal who refuses to be drawn into the physical presence debate, but insists on the spiritual significance of the whole Eucharist. One thing is for sure, the Lord's Supper, or if you are Roman Catholic, the Eucharist (or Mass) is perhaps the most significant ritual or sacrament the Church can observe and take together. During the days of Paul, there are no denominations that we talk so much about today. Instead, there are divisions. There are multiple parties trying to boast that their faith is better than one another. The Corinthian Church was in a state of disunity and discord.

Paul reprimands them for divisions (1 Cor 11:18). He points out the factions among them. He blames the church for the lack of unity to share and to care for one another. There are disparate levels of wealth, with the rich feeding only themselves and the poor left with nothing. Worse, some even uses the Lord's Name in vain by eating unworthily at the Lord's table with the haves looking down on the have-nots. Instead of coming to the Holy Meal in the Name of Christ, they come in the name of self! Thus, Paul tells them to examine their own selves, lest they are punished with death (v30).

While we do not want to busy ourselves with the denominational differences, it is appropriate for us to observe the spirit rather than the letter of the Lord's Supper. Let me share five common elements of the Lord's Supper which I believe is common ground. The details may be somewhat different according to your religious persuasion, but the general thrust is the same.

Five Signs Your Church Is On Life Support

"42They devoted themselves to the apostles’ teaching and to fellowship, to the breaking of bread and to prayer. 43Everyone was filled with awe at the many wonders and signs performed by the apostles. 44All the believers were together and had everything in common. 45They sold property and possessions to give to anyone who had need. 46Every day they continued to meet together in the temple courts. They broke bread in their homes and ate together with glad and sincere hearts, 47praising God and enjoying the favor of all the people. And the Lord added to their number daily those who were being saved." (Acts 2:42-47)

In "Mourning the Death of a Church," the writer Angie Mabry-Nauta began with a grim picture of the American Church scene where nine churches close down daily.  Her church was one of them. In fact, one of the comments in the article disturbed me. That person said: "Can't we figure out a way to save our church?" It makes me wonder theologically. Is it not the Church who will be the vehicle to share the message of salvation? If the Church herself needs saving, what hope will there be for others who need to hear the gospel? Mabry-Nauta then compared the dying of the church to the dying of an individual, asking the same kind of questions pertaining to death and dying. How does one desire to die? What is the quality of death? What does it mean to call it quits? It was a tough and emotional struggle for her and for her church that decided to shut down. 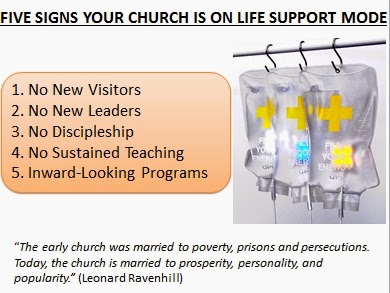 Read more »
Posted by Sabbath Walk at 3:01 PM No comments:

"1Therefore, since we are surrounded by such a great cloud of witnesses, let us throw off everything that hinders and the sin that so easily entangles. And let us run with perseverance the race marked out for us, 2fixing our eyes on Jesus, the pioneer and perfecter of faith. For the joy set before him he endured the cross, scorning its shame, and sat down at the right hand of the throne of God. 3Consider him who endured such opposition from sinners, so that you will not grow weary and lose heart." (Hebrews 12:1-3)

Synopsis: What is Lent all about? Is it about refraining from chocolates or coffee? Is it about fasting till our face turns blue? Or is it about a turning toward an invitation to spiritual maturity? In this week's article, I want to focus on the four pathways of holiness, to learn to live in greater spiritual maturity as well as growing discernment of the ease of entanglement with the worldly; the focus of attention on the Cross; the the joy of perseverance in faith. That we be complete in Christ.

Lent has begun. Ash Wednesday two days ago marks the traditional kickoff with forty days to Holy Week, also known as Passion Week where Jesus entered Jerusalem en-route to the cross.  During this time, many believers make special efforts toward a more intense and intentional doing of one or more spiritual disciplines. It could be prayer. It can be fasting. For the latter, some contributors to ChristianityToday recently checked on the Twitter world to reveal the five most popular things to fast from: "Chocolate, Twitter, school, alcohol, and swearing." When I saw the list, I cannot help but wonder if these people will start swearing again after Lent.


A) Lent as Giving Up Some Things?

There is also another list which tries to classify the tweets in terms of categories of things people are seeking to give up during Lent.
As I go down the list, I cannot help but wonder how many of these people are Christians. At the end of the article, I felt something seems amiss. Honestly, these efforts to fast from various things tend to miss the point of Lent totally. The purpose of Lent is not the fasting or the refraining. Neither is it some kind of a contemporary sacrifice of modern comfort so that we can experience a piece of Christ's suffering now. No. Theologically there is no need to do that, for Christ's sacrifice is already all-sufficient. No one can add or subtract from it. That is why Jesus said just before his death, "It is finished." His work of grace and salvation is finished at the cross. The purpose of fasting is to disentangle ourselves from things that easily hinder us from our pursuit of Christ. Looking at Hebrews 12:1, if the giving up of some things during Lent is a way of throwing off anything that "hinders," so that we can run the race set before us, it is a good thing.

Read more »
Posted by Sabbath Walk at 3:37 PM No comments: