Christianity has an increasingly negative image problem. This is easily felt in the West, especially in North America. For Europe, the Christian influence has largely been erased from the minds of ordinary people. Even the ancient artifacts and grand structures of Christendom in Europe wow mostly visitors to Europe. In a post George W Bush era, I sense an even greater negativity against anything Christian in many parts of America and Canada.

Just this week, I read of a graduate from Trinity Western University, a private institution that is openly Christian, being rejected from a Norwegian company because she was deemed "unqualified." The rejection email was followed by sneers and jeers about her school, her God, and her faith. It is not only the rejection, but the harsh negativity of the prospective employers who claimed that it was Christianity that destroyed their culture. Feeling hurt and discriminated against, the plucky Bethany Paquette filed a complaint with the BC Human Rights Tribunal. I hope justice will be served as Paquette certainly does not deserve being ridiculed personally or her faith being lampooned foolishly.

As I think about it, her case is not alone. There is a particularly high animosity against evangelicals or anyone standing up for their Christian beliefs. Why are Christians being labeled "bigots," "homophobes," "intolerant," "judgmental," "anti-abortion," and all kinds of nasty names? In fact, some of the most ferocious voices against Christianity are formerly from Christian backgrounds. People like John Loftus, who was formerly a Christian minister, but is now a forceful opponent against Christianity. He is the founder of the anti-Christian blog named, "Debunking Christianity." A fellow alumni of mine had debated him, even wrote a book together with him to ensure that both views are represented. You can read my review of "God or Godless" here.

How should Christians deal with negativity? One way is to do a frontal assault by direct debate and argumentation. You have apologists like Ravi Zacharias International Ministry, William Lane Craig, Josh McDowell, Norman Geisler, CS Lewis, Alister McGrath, and many who can do that. Others like John G Stackhouse will adopt a "Humble Apologetics" format. Another way is to simply ignore the accusations and avoid any forms of confrontation. For me, there is no fixed way to deal with angry attacks. It is one thing to win arguments. It is yet another to win over the person.

I wrote the following yesterday in order to suggest a 3L approach in dealing with negativity. I list them below for your reading.


Three Postures I Seek to Adopt

There is something that troubles me whenever I read posts on Christian forums or public debates that pit different groups against one another. Whether it is the AWARE debacle, the CHC trials, the prosperity gospel debates over Joseph Prince, or the most recent HCI social media storms on the FOTF session, I ponder over the many responses that appear tit-for-tat rather than listening and learning. Some debates turned into full blown attacks even on the personal scale, making it an ugly scene to encourage others to wade in constructive participation. What does it mean to speak the truth in love?

I like to suggest 3 postures to adopt. I write with myself as the primary audience, inviting you all to listen in. If it helps, that's great. If not, thanks for looking.

1) LISTEN. The New Testament reminds me to be quick to listen and slow to speak. In FB terminology, it means to be quick to understand and slow to respond. A pastor friend of mine once said that when he receives an email that hurts, he would take about 3 days to wait over it, to pray, and to ask how he should respond, if he needs to respond. I think that is helpful especially when tempers are high. Maybe we may not need 72 hours. Just ensure we set aside some time to cool off and to pray. The ancients taught us that Anger is a big inhibitor of prayer. The Quakers also have this saying: "The enemy is one whose story we have not heard." No wonder Quakers spend lots of time in silence, that they may listen. This attitude of listening is an act of grace. In our social media world, silence does not mean simply not speaking. It also means not typing our responses until we have understood any particular viewpoint in its entirety. Lord, teach me to listen well, (or simply ignore if appropriate), even to dissenting voices that are rude, or downright vicious.


2) LEARN. The mark of a disciple is in his willingness to learn. It is no coincidence that the underlying meaning of the Greek for disciple is "mathetes" which can also be translated as "a learner." It is easy to search the Internet to support what we want. It is not so easy to restrain ourselves from giving our "two cents" worth of thought, just to demonstrate that our point is more valid that others. Pride lurks dangerously in the heated moments of any intellectual debate. What good is it to win an argument but lose the brother/sister? What benefit does it bring to our souls if our words cut deeply and painfully even though our points are right? In Facebook engagements, one way is to ask questions that clarify, and not be too quick to vilify. This attitude of learning is a mark of discipleship. Lord, help me learn with Your humility as guide. 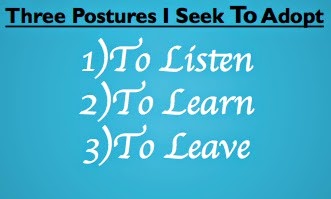 3) LEAVE. The first posture of listening reminds us of St Francis's prayer that to be a channel of God's peace means "to understand" is more important than "being understood." The second posture of learning puts ourselves in place that we are still learning in the school of life. We are not there yet. The Chinese have this saying: "一山还比一山高" which essentially means there is always a mountain higher than ours. The third posture is about what we want to leave behind at the end of every discussion. I know. In heated moments, it is hard to think like this. In the West, the word "Christian" is increasingly surrounded by negativity. In the first century when the believers were first called "Christians" at Antioch, the name "Christian" is a derogatory term. I fear it is becoming like that in our society. I know that full well in the West. Far too many believers practice our Christian lives on the basis of intellect first, emotions second, actions third. Distinguished Yale theologian Miroslav Volf argued for a reverse, that Christians ought to live "from hand to heart to head." Do all the good you can, and leave behind a trail of good testimonies that lead to good feelings, that would encourage us toward good theology. I know this is quite a paradigm shift, especially with me being immersed in theological training. In social media, I want to ask myself what do I want to leave behind? Very often, it is a tendency to show off. I must resist that. In the spirit of koinonia, I must leave behind traces of Christ's love.

Hopefully, Christians in forums we are a part of, we can spark off a movement that listens to opposing voices, that learns from different views, that would leave behind traces of Christ that will change public perceptions of Christianity wherever we are. If we need to speak, if we absolutely need to say something, we need to practice speaking the truth in love.

I am nowhere near the three postures, but I am trying to be, with God's help. If you find this preachy, do forgive me. My purpose is to help cultivate something Christians can do, in the light of what I perceive is an increasingly negative climate outside, targeted at Christians. Thanks for reading.

THOUGHT: "The same conditions that prevailed in Rome prevail in our society. Before Rome fell, her standards were abandoned, the family disintegrated, divorce prevailed, immorality was rampant, and faith was at a low ebb." (Billy Graham)


sabbathwalk
Copyright by SabbathWalk. This devotional is sent to you free of charge. If you feel blessed or ministered to by SabbathWalk weekly devotionals, feel free to forward to friends, or to invite them to subscribe online at http://blog.sabbathwalk.org . You can also send me an email at cyap@sabbathwalk.org for comments or inquiries. Note that views expressed are personal opinions of the author and do not necessarily represent the views of any organization.