"3Praise be to the God and Father of our Lord Jesus Christ, the Father of compassion and the God of all comfort, 4who comforts us in all our troubles, so that we can comfort those in any trouble with the comfort we ourselves receive from God." (2 Cor 1:3-4)


It was a rough week for the city of Charleston, South Carolina, in particular, for the families of nine members of Emanuel African Methodist Episcopal Church, who were shot dead by a 21-year old white man. One hour into a regular Wednesday evening's Bible study, Dylan Roof, shot dead nine black members of the study group in cold blood. It was a murder cum massacre of the racist order. It was totally uncalled for and totally evil to the core. The crime was beyond anybody's wildest imagination and the act roundly condemned by all persons of every race and religion. Even the most hardened of hearts would have their consciences seared with pain and disbelief. After all, we are not talking about a war zone or some kind of a gangland battleground. It was a Church where the key "weapons" of warfare are not guns but prayers, not clenched fists but open arms, not hatred but love. That is what made the whole shooting such a mind-boggling event. On top of that, Roof was graciously invited to do a Bible study with the pastor among them. No one would have thought that welcoming a guest like Roof would turn into a vicious and bloody murder scene. Although Roof managed to escape and subsequently caught a day later, the nine who died never stood a chance and were ushered very suddenly into the presence of the Lord. How do we explain that?

A) Always a Mental Condition?

In cases this this, there are always some who would try to justify it from a psychiatrist's angle, pleading for leniency on the basis of a mental condition. Such is the approach done by Newsweek, that headlined the whole shooting event as follows: "Charleston Massacre: Mental Illness Common Thread for Mass Shootings." Like a skilled researcher, the report goes on to highlight seven previous cases of mental illnesses behind each mass shooting. The problem is, what if they are wrong? What gives them the sudden insight into the mind of this killer? Even mental health professionals are not entirely sure that every case is a mental puzzle in the first place. For us laypersons, who on earth does NOT have mental problems when under stress? How many people would not break under duress? Here's the problem. Who gives people the sudden inside scoop on all shootings to primarily psychology? In an age where people are innocent until proven guilty, what about their victims whom they have hurt before the final judgment? Don't they too have mental problems and scars? For all the attention dished out on the killer's welfare, what about the families of the victims?

B) What About a Prolonged Stance of Doing Nothing?

What if the problem is not clinical but something more common: Hatred. Arrogance. Racism. In this case, I would prefer to call a spade as a spade. The Charleston shooting is a pure racist crime, something that had been allowed to brood, even after the civil rights victories led by the late Dr Martin Luther King Jr. Under the cover of tourism and history, some South Carolina leaders had pushed for and got their wish to keep the Confederate flag intact, and flying. This flag was designed by a William T. Thompson back in 1863, during a time where racial discrimination and hatred were prevalent in the South. It was created with pure racism at its core. Thankfully, calls for taking the confederate flag down from the South Carolina capitol are picking up steam. Today, the number of petition signatures have exceeded 334,000. Another Time magazine report pushes it even further, asking for ALL confederate flags throughout the United States be taken down. It's incredible that even in today's America, where people constantly harp upon freedom for all people, and equality for all races, symbols continue to exist that run against the very essence of such noble cries.

While the national flag and the state flags are lowered at half mast on government buildings to remember the victims, the Confederate flag instead was left flying high. Chained and flown with pride, it can only be lowered with at least a two-thirds majority vote in the state legislature. It proves once again how ingrained the symbols of racism are in these former confederates states that may have lost the American civil war, but continue to ride alongside ordinary citizens, looking dormant on the outside, but having sinister ambitions on the inside. It waits until the time is right before showcasing the underlying forces of racial supremacy. It is shameful to see elected officials unwilling to risk their political careers by sticking the decision making to the "majority" of the people. Come on. Elected officials have a higher calling. They must do what is right in the consciences of decency. They must uphold what is truth. They must aim to uphold the very fabric of dignity for all people.  In doing so, they are setting forth a precedent that may one day become a life-saver for themselves. For what if one day, their race becomes the minority? For those who still insist on the legitimacy of the confederate flag to be left as it is, why don't you do just one thing. Imagine if one of the nine who was senselessly killed is a loved one of yours, by someone who is a clear racist. Would you not raise your hand in solidarity with the rest of us to put down this symbol of hatred and racial discrimination once and for all?

C) Forgiven by Not Forgotten

When the families of the nine victims openly forgave the shooter, it tugged the heartstrings of many people, including yours truly. Instead of hatred, there is love. Instead of retaliation, there is a hand reaching out in reconciliation. Instead of cries for revenge, there is forgiveness. Yet, there is something quite troubling for me. While it is true that we learn to forgive, I wonder if the families of the victims had been too quick to forgive? Are their efforts to reach out to the seemingly unrepentant killer somewhat premature? I cannot judge, but just assume that they have decided it was the best course of action for them.

Personally for me, it would have been totally acceptable to take time to retreat from the limelight. Take time to simply grieve over the loss of the nine. Take time to just lock oneself away from public attention toward private moments of sadness and remembrance. Forget about the killer for now. Forget about the senseless circumstances leading up to the shooting. Forget about the reasons why or why not. Forget about the media reports and analyses that attempt to play the role of experts and first-hand knowledge, despite their emotional distance. Experts are known for whatever they had done previously. This incident at Charleston can only be experienced firsthand, and that is the domain of Emanuel AME Church members for now.

Focus on the grief over the loss of dear ones. Just because one takes time to grieve for the loss does not mean one is not forgiving. For forgiveness is a process, not a one-time statement. For the rest of us, we can pray for the victims. The road ahead will be long and arduous, difficult and emotionally traumatic. Pray, "Lord we want to forgive. Help us to truly forgive." 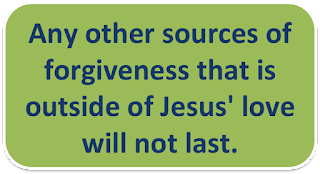 D) Only in Christ, there is True Forgiveness
Paul's second letter to the Corinthians is bathed in much pain and suffering, where he himself who had suffered and was comforted, was able to comfort others in turn. More importantly, Paul was not just talking about himself. He was talking about Christ, who himself had suffered immensely. For Christ was unarmed, yet whipped. He was innocent, yet found guilty by a kangaroo court. He was alone, yet was abused like a dangerous criminal with several guards surrounding him. He was pierced by the sword for our transgressions. He was spitted on and humiliated for our sakes. His life was taken away for no other reason that for doing His Father's Will. Only Jesus can understand the depths of the sorrow of all the hurt. This is where I want to pause at.

During this time of grievous hurt and injustice, senseless murder and silly reporting, incredible claims and ridiculous theories, do not forget that as a human, there will be no true forgiveness until we ourselves have Christ in our hearts. He is the one who can truly forgive. We forgive then out of this strength in Jesus. Any other sources of forgiveness that is outside of Jesus' love will not last.

THOUGHT: "Everyone says forgiveness is a lovely idea, until they have something to forgive." (CS Lewis)

Resources for News on the Charleston Shooting Aftermath: