In Defense of Plan B

“Paul and his companions traveled throughout the region of Phrygia and Galatia, having been kept by the Holy Spirit from preaching the word in the province of Asia. When they came to the border of Mysia, they tried to enter Bithynia, but the Spirit of Jesus would not allow them to. So they passed by Mysia and went down to Troas.” (Acts 16:6-8)

Sometimes I feel like we are easily stuck when we feel like we do not have all the right answers. More often than not, we like to have things laid out properly and done correctly before we really get that feeling of satisfaction. When things are rushed, we feel less than 100%. We are not as contented with the results, saying that things could have been better. When our Plan As fail to take effect, we kick in Plan B, often lamenting that “if only” we have Plan A, then life will be better. Much better. Pete Wilson writes about this effect on how we tend to believe that the grass is always greener on the other side. We say,

When our Plan As fail, we scramble our Plan Bs reluctantly. We work out our contingency plans not without dreaming how life is much ‘better’ if our As turn out according to plan. This week, I like to reflect on why we ought to see that very often, man’s Plan B may very well be God’s Plan A for us.

A) When A Fails

People generally loves a good story. Fairy tales are best. It brings about the glimmer of hope that we can one day have a happily-ever-after ending. Single girls dream of being swept up by a handsome princely character, full of riches and charisma. Married men dream of a nice loving wife who cooks well, brings us children brilliantly, looks beautiful all the time, and provides excellent sex on bed. Young men envision careers that provides global travel with executive perks. Living in a society infatuated with all things success and happiness, everyone seeks after the same things: Becoming rich and successful. Even Christians are caught up in that mad rat race. They employ their best efforts. They utilize their connections. Some even use God. When times are good, they answer with shouts of “Hallelujah! Praise God!” When times are bad, they question God.

B) The Bithynia Denial 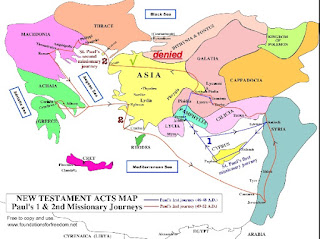 After traveling far and wide, Paul must have gotten used to preaching the gospel to different lands. After all, Acts recorded him making four missionary journeys in his outreach to the Gentiles. During his second missionary journey, made sometime between AD 50-52, Paul and his followers encountered a road block. After traveling westward through the lands of Galatia and Phrygia, they were attempting to bring the gospel to the lands west of Mysia. At that time, the Roman Empire has divided Phrygia into two separate regions: Asia and Galatia. It was in Asia that Paul encountered the impasse. This Roman province of Asia is not to be confused with our modern understanding of Asia. Around AD 25, the Romans have carved out an expanded area comprising of cities such as Mysia, Lydia, Caria, and parts of Phrygia.

So Paul and his companions, instead of heading up northward toward Bithynia, they headed west toward Troas. All because Paul had been prevented from entering Bithynia. Whether it is through visions, dreams, of physical barriers we do not know. What we do know is that Paul wanted to enter Bithynia (His Plan A) but instead entered Troas (Plan B). The text says that “the Spirit of Jesus would not allow them to” enter Bithynia. As a result, they skipped Mysia.

C) Paul’s Focus is on Christ

I am not sure how Paul felt at that time. Perhaps, he was disappointed that Bithynia was out of his reach. From the use of the Greek ‘perazo,’ it can be interpreted to indicate their best efforts to enter the land. This same verb can also be translated as ‘to attempt to go; or tempted to enter.’ It is enlightening to note that as far as the gospel is concerned, it is not the place of travel but the heart of obedience that matters. For Paul, if northward bound is not possible, head westward. It does not matter as long as the gospel is preached. This attitude has been recorded in Philippians 1:18:

“But what does it matter? The important thing is that in every way, whether from false motives or true, Christ is preached. And because of this I rejoice. Yes, and I will continue to rejoice,” (Philippians 1:18)


I have heard of some friends of mine wanting to reach a particular people group for God. Along the way, their best intentions fell apart. Their dreams were not met. Their Plan A fails to materialize and they have to accept their Plan Bs, even Cs. I too have my fair share of Plan A not coming into play.

Back in 2004, I was eager to get theological training, and then return to my home church and hopefully teach in a local seminary. Naive and idealistic, my wife and I uprooted ourselves from the comforts of Singapore to go to Canada, thinking that after 3-4 years, we will all return and then serve happily ever after back home. Unfortunately, that Plan A seems more distant with each passing year. Our kids became more used to the school systems here. Lifestyles change. People changes. We change. Even the place that we used to call home has changed. The Singapore we know in 2004 is no longer the same as in 2012. My father passed away in 2010. Each time I returned home for a visit, people tend to be extremely busy with their own stuff. A friend of mine who has since decided to stay in Canada commented to me in a somewhat skeptical manner:


“Don’t bother returning to Singapore. People have no time for you anyway.”

I hesitate to come to that conclusion. I know of many people who will spend time. I also understand why he said what he said. After all, I too have experienced my fair share of disappointments with regards to trying to meet up with ‘busy’ people in Singapore. You can plan ahead. You can even get all the people’s names and reminders in place. Yet, at the very last minute, things can change. People have their own priorities. Their Plan As are not necessarily yours, and your Plan As is not necessarily theirs.

Personally, we need to be open to one another. Emergencies can happen at any time. Our Plan As are often simply a plan waiting to be changed at last minute’s notice. Matt Chandler once said that there is a big difference between trust and understanding. Trust is what is needed when we lack the understanding. Likewise, when we fail to understand why our Plan As did not work, we need to trust God to help us work out our Plan Bs, Cs, or even Ds.

Who knows? Our Plan As need time to be baked in God’s perfect timing. In the meantime, He can choose to use us more effectively through Bs, Cs, Ds, Es, even Fs. As far as God’s will is concerned, it is not the plan per se. It is the heart that seeks to obey God regardless of what it is. Pete Wilson writes:

“God can take the pain and hurt you’ve experienced and use it to expand and mold your heart to reflect his heart. The question is, do you think you can sacrifice who you are today for who you could become?” (Pete Wilson, Plan B, 222)


Bingo! Sacrificing something temporal in order to gain something eternal is priceless. Paul is able to obey God despite the Bithynian denial. He knows what is at stake. It is not his pride of being denied entry. Neither is it his frustration at why God is stopping him from sharing the gospel northward. As the song goes in the Jimmy and Carol Owens’s play called the Dreamer:

“When GOD Closes the door, HE opens a window,
so I can see HE's working it out the very best for me.”


Trust God. Trust Him for all of your plans, not just your plan As or Bs. As far as God is concerned, He does not distinguish it according to A, B, C, D, or whatever. His goal is to love us so much that He gave Jesus for us. We are called to bring this love into our homes and beyond our local comforts of home.


THOUGHT:  "Disappointment to a noble soul is what cold water is to burning metal; it strengthens, tempers, intensifies, but never destroys it." (Eliza Tabor)