"They devoted themselves to the apostles’ teaching and to the fellowship, to the breaking of bread and to prayer. Everyone was filled with awe, and many wonders and miraculous signs were done by the apostles. All the believers were together and had everything in common. Selling their possessions and goods, they gave to anyone as he had need. Every day they continued to meet together in the temple courts. They broke bread in their homes and ate together with glad and sincere hearts, praising God and enjoying the favor of all the people. And the Lord added to their number daily those who were being saved."(Acts 2:42-47)


I will be graduating next month from my doctoral program. That means, after May 11th, you can officially call me (Dr), though I will feel weird about it all. I want to pay tribute to my small group in Singapore. Many of them have been supporting me in different ways for the many years since I left for Vancouver. Thus, for the next four weeks, beginning with this article, I will be writing on small group matters. This week, I will be reflecting on small groups as a necessary part of any Church. Growing Churches will have vibrant small groups. Growing groups have people who are convicted by the Holy Spirit about one's sin, counseled by one another, and live in community that shares not just material needs, but spiritual needs.

In a nutshell, the modern Church is a far cry from the early Church. I confess I may have been a little harsh on the modern Church. My point is that I am more amazed at how the Church in Acts behave. I am simply giving credit where credit is due. The Acts Church is amazing! It does something that modern Church seminars, inspirational talks, or leadership conferences cannot replicate. Growth. We have seen how the world's largest Church has grown beyond a million members. South Korea's David Cho Yonggi's Church has been growing tremendously. We have also seen the great success stories of Willow Creek Community Church in Chicago, as well as Rick Warren's Saddleback Church. There are also stories of the unofficial church in China, North Korea, and elsewhere in Africa that are growing by leaps and bounds.  A sizable amount of growth comes from the prosperity gospel camp.

B) A Growing Church Has Vibrant Small Groups

Go to most growing churches and you can easily hear leaders talking up the impact of small groups and how people's lives have been changed. Most churches have them. Traditional churches need them. Megachurches thrive on them. One of the biggest impacts have come about through the popular concept of 'cell groups.'

Groups are essential to any Church. It is essential for community building. A healthy Church is not one that has a big building packed every Sunday. A healthy Church is one that has every member in a small group. In other words, a healthy Church is not an efficiently run organization, but a living organism. An organization can strategize, plan, and implement programs to attract people. An organism will be attractive in itself. After all, if a person is cared for, and is able to care for others, everything else is secondary. That includes programs, type of study materials, or the logistics of meeting times and places. If a person has a reason to come, he/she will find every means to make it to the meeting. If the person does not want to come, any excuse is possible.

C) A Program Is Only An Introduction

I once interviewed a pastor at a large Church about his Church strategy for growth. "Programs!" he said. His reasoning was that the programs are needed to meet the different needs of the people. Thus, there are programs for different ethnic groups, various age groups, and all kinds of interest groups. The basic conviction is that, with the right program mix, the people will keep coming, and keep bringing friends. I am not too sure if that works. I know of several people from that same church. Apparently, they are not very involved in the Church at all. "Attend Church service only" is the regular answer. The pastors do not know them. They do not know others. Others do not even know they exist. My problem with this approach is that programs may draw people in, but they do not necessarily build relationships. We build relationships with people meeting people where they are, not programs catering to people's tastes.

My point is, programs come and go. People live and love. Programs only lead us to the meeting place, but the rest is up to the people. Programs are temporal. People are not. If that is the case, why focus on programs when we ought to focus on people?

Now, let me be clear. I am not against programs. I simply want to maintain that programs are only introductions or invitations. The growing and the relating is up to God using us, and us obeying the Spirit's leading. 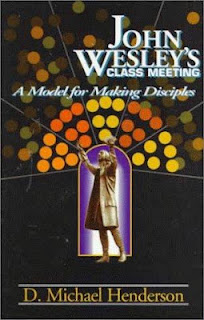 John Wesley has often been credited with the invention of small groups. Douglas Hunt calls Wesley the "pioneer of small-group evangelism." Tim Stafford acknowledges the small group as one of Wesley's "most enduring legacies." It has also been widely recorded that John Wesley's famous "Holy Club" marks one of the earliest versions of Wesleyan style small groups. Here is one tip that Wesley has given the Christian world. D Michael Henderson has even called John Wesley's Class Meetings as the "Model for Making Disciples." John Wesley writes about the beginning of a small group.

"In the latter end of the year 1739, eight or ten persons came to me in London, who appeared to be deeply convinced of sin, and earnestly groaning for redemption. They desired (as did two or three more the next day) that I would spend some time with them in prayer, and advise them how to flee from the wrath to come; which they say continually hanging over their heads; that we might have more time for this great work, I appointed a day when they might all come together; which from thenceforward, they did every week, namely, on Thursday, in the evening. To these, and as many more as desired to join with them (for their number increased daily) I gave those advices, from time to time, which I judged most needful for them; and we always concluded our meeting with prayer suited to their several necessities." (John Wesley, in his Preface to the Rules of the Societies)


Like the Acts Church, I am amazed at John Wesley's strict no-holds-barred purpose of conviction, counsel, and communion. Firstly, there is a conviction to tackle sin head on. Secondly, there is counsel via opportunities to pray and come together to meet on a regular basis. While it is a little different from the Acts Church which meets regularly, Wesley's model follows the rules of consistency (every week) rather than a literal copy of Acts (every day). Thirdly, there is a communion element, whether people's needs are addressed via prayer.

THOUGHT: "The heart of this revolutionary system was a cell group of six to eight people which Wesley named 'the class meeting.' They met weekly to give an account of their personal spiritual growth, according to the rules and following the procedures which Wesley had carefully crafted. The class meeting proved to be such an effective tool for radical personal change that it can be acknowledged as the pivotal medium which enabled the message to be internalized. The Methodist movement helped shape England's moral and spiritual destiny, and its impact continues to be felt around the world, . . . . . but the key element was the class meeting." (D. Michael Henderson, A Model for Making Disciples, Evangel Publishing, 1997, p11-12)