Spiritual Vibrancy (Preaching of the Word)

"Preach the word; be prepared in season and out of season; correct, rebuke and encourage--with great patience and careful instruction." (2 Timothy 4:2)

The Preaching of the Word

One of the most striking traits in any revivals is the strong preaching of the Word. In the 18th Century (1731-1755), in what we know as the first great awakening in North America, we have men like Jonathan Edwards and George Whitefield, whose powerful preaching revitalized the entire society to go forth in faith and witness of the gospel of Christ. In the nineteenth century (1790-1840), there is the American spiritual awakening with Francis Asbury (Methodist), Henry Ward Beecher (Presbyterian), Charles Finney, and others who inspired a new generation with powerful preaching against the ills of society. Then comes the 20th Century (1850-1900) spiritual awakening, thanks to the Pentecostal movement and the Holiness movement. People like Dwight L. Moody and Ira Sankey were household names. In the 21st Century, we will all recognize the names of Billy Graham, Dr Martin Luther King Jr, and in our modern days, Chuck Swindoll, Rick Warren, and Tim Keller. Many of the megachurches all had one thing in common: Powerful preaching over the pulpit.


I am not advocating for churches to all become megachurches. That is not my point. I am basically saying that Christian ministry must begin with the Word, and one of the most important aspects of this ministry is the preaching. Given that most Christians gather at least once a week, mostly on Sundays, and for some, Sundays may be the only spiritual input they have, it is imperative that preaching be given a high priority. The influential preacher, HB Charles Jr says:

"But preaching is and has always been the distinguishing mark of the true church of Jesus Christ. Faithful preaching is the essential mark of the true church, because if a church faithfully preaches the Word and allows its life to be shaped by it, everything will eventually fall into its proper place. Conversely, a church’s apparent success is only incidental if it does not have a biblical standard of measuring, sustaining, or renewing its ministry. Biblical preaching is the central, primary, and decisive function of those God calls to shepherd the church. Paul’s charge to Timothy is the Lord’s charge to every preacher: Preach the Word! This divine command obligates us to preach; moreover, it specifies what we are to preach: the Word. The importance of preaching rests in its content, not in its function. Our preaching is not the reason the Word works. The Word is the reason our preaching works." (H.B. Charles Jr, On Preaching, Chicago, IL: Moody Publishers, 2014, p16-7)


As a "distinguishing mark," everyone look forward to a good sermon. They expect a message from God. In some communities, everything is arranged and gathered according to the preacher's message. The songs are selected based on the passage. The theme of the worship service is centered around the message in the passage. The overall direction of the worship service is focused on the pulpit. Charles Jr goes even further to say that "biblical preaching is the central, primary, and decisive function" of people called to shepherd the Church. That means pastors and all in the pulpit ministry. How does that look like?

A good sermon does at least three things. First, it is faithful to the text. Psalms 1 lays the foundation of what the Word means for us.


"1Blessed is the one who does not walk in step with the wicked or stand in the way that sinners take or sit in the company of mockers, 2but whose delight is in the law of the Lord, and who meditates on his law day and night. 3That person is like a tree planted by streams of water, which yields its fruit in season and whose leaf does not wither— whatever they do prospers." 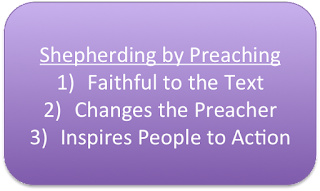 Unlike the famous TV X-Files series' insistence that "The truth is out there," the Christian asserts that the truth is in the Word of God. Meditating on the Word of God does not mean we multitask ourselves with non-essentials and sinful activities. It means we stop walking with the wicked. We depart from the way of sinners. We do not stand in the same positions as unrepentant sinners. We do not participate in mockery or unholy criticisms. In our modern society, it is increasingly common for the people at large to insist upon their own ways. The moment the Church speaks out on some of the most contentious issues, the hostility lights up with fury and vengeful words. How frequent have Christians been called "bigots," "hypocrites," "homophobic," and so on? Lots of times, whether warranted or not. Kirsten Powers recently released a new book entitled, "The Rise of the Intolerant Left." In an interview with Christianity Today, Powers commented:


It is always important to ask ourselves what our actions or reactions are based upon. Is it upon the Word or is it one's personal opinion? Is it based on biblical foundations of interpretations or is it based on subjective viewpoints? Asking whether our opinions are faithful to the text will be a good exercise in itself. I am particularly concerned for Christians who attack one another on the basis of a subjective interpretation. The truth is, we are called to judge not, lest we be judged. Instead, we are called to preach the Word in season and out of season, and always to be prepared to give the reasons for the hope of faith.

Third, it nudges the heart to want to do something about it. When a message is merely good entertainment for the ears, it will not go beyond the ears. When the Word misses the heart, the world takes over. Jesus warns us about the listening of the Word and the practicing of it and likens it to the building of a house on sand or on a solid rock. The preaching of the Word is like the building of a house. Assuming that the quality of the materials and workmanship are similar, what is different will be where the house is going to sit upon. When listeners put the Word into practice, the ground is a solid and unmovable rock. If not, it would be sand.

May the preaching of the Word each Sunday brings life.

THOUGHT: "Expository preaching is the communication of a biblical concept, derived from and transmitted through a historical, grammatical, and literary study of a passage in its context, which the Holy Spirit first applies to the personality and experience of the preacher, then through the preacher, applies to the hearers." (Haddon Robinson, Biblical Preaching, Baker, 2014, p14)