"Later, knowing that everything had now been finished, and so that Scripture would be fulfilled, Jesus said, 'I am thirsty.' A jar of wine vinegar was there, so they soaked a sponge in it, put the sponge on a stalk of the hyssop plant, and lifted it to Jesus' lip. When he had received the drink, Jesus said, 'It is finished.' With that, he bowed his head and gave up his spirit." (John 19:28-30)


SYNOPSIS: Good Friday is often remembered as the day where the sins of the world are laid upon Jesus Christ. Resurrection Sunday is the day of hope. What about Saturday?

Today is Good Friday. Christians all over the world commemorate this event as the day where the wrath of God was satisfied as Jesus took upon himself the punishment for the sins of the whole world. This is through no fault of his but all of mankind. Theologians call this the atonement. Also called the penal substitution where Jesus bore upon himself the sins of the whole world for our sake, it is a core doctrine that unites the Church during this Good Friday remembrance. That is not all. In our Christian doctrine of the Trinity, in Jesus is suffering, it also means God the Father and the Holy Spirit suffers too. For God the Father, Jesus the Son, and the Holy Spirit are three persons in one Godhead. When one suffers, all suffer. It is not three Gods but one. It is a mystery that has confounded people through the ages. One of the best ways to understand the Trinity is this:

Those who over-analyze this risk turning the Trinity into some form of heresy about the Trinity. This is not to say we cannot study or think of the Trinity. It simply means that there is an aura of mystery that will keep us in wonder and openness to revelation to come. The Athanasian Creed is particularly instructive.

A) Much Evil in the World 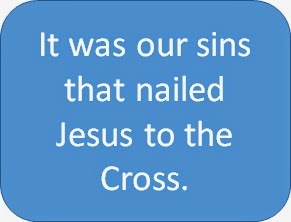 People who avoid the atonement because of its gory will have to grapple with the evils of sin. There is much evil in this world and just hearing about it sickens most of us to the core. Think of the innocent children being forced into sex slavery and child labour. Think of how women in many countries were forced into slavery, and due to circumstances voluntarily subjected themselves to brutality and abuse for the sake of their families. Think about the injustices happening when the powerful take advantage of the weak. Think of how Christians are martyred for their faith. Think of the marginalized in society that do not have much to live on, and like the story told by the prophet Nathan to King David, the rich with many livestock slaughtering the poor with a little lamb. People who underestimate the need for the atonement will have misjudged the utter evil of sin. In "Made in the USA," Alisa Jordheim explores how the sex trade has dehumanized vulnerable women and children. In many cases, the victims were unsuspecting teenagers struggling with matters at home. Jordheim shares the story of how a mother served her clients in the sex trade while her own daughter hid under the bed. If the mother failed to pay off the debts, soon the daughter would need to do what her mother does. Poor girls were lured with promises of legitimate jobs soon found themselves trapped in a cycle of illicit activities and illegitimate industry. It was the result of people in power who abuse the vulnerable for their own ends. The evil goes much further as explained by an unnamed journalist observing from the streets of Svay Pak in Cambodia.


“Buying sex with a twelve-year-old girl in Cambodia takes less time and effort than changing money in a bank or paying a telephone bill. . . . [Thse kids spend their days in] shophouses where you will be offered “boom-boom”—sex—and “yum-yum”—oral sex—for $5 a time in cramped, clammy rooms and makeshift plywood cubicles.” (From Alisa Jordheim's Made in the USA, Oviedo, FL: HigherLife, 2014, p8)

There is much evil in the world. Just because we do not see it does not mean it is not there. We can play ostrich in the sand but Jesus would not do that. He entered Jerusalem on Palm Sunday. He cleared the temple the next day (Mark 11:15-18). On Tuesday that week, his teachings went "viral" as the religious leaders went into overdrive to pin him down (Mark 11:27-13:37). He had his Last Supper on Thursday with his disciples, where he even asked Judas Iscariot to do quickly what he had planned to do. It was a week that began in an ecstatic Palm Sunday but landed on a gloomy and dark Friday when Jesus was crucified.

Not often talked about is the day between Good Friday and Resurrection Sunday. The gospels do not have much to say. Matthew described the quiet way in which Joseph, the rich man from Arimathea cared for the body and buried it in a tomb, protected by a big stone at the entrance under the watchful eye of guards with Mary and Mary Magdalene watching. The oldest gospel, Mark gave us additional information how Joseph requested permission from the authorities before proceeding to care for the body. Luke recorded Joseph's actions and faith, the time of the Sabbath approaching, and further activities of the women preparing for Sabbath rest. John mentioned the presence of Nicodemus, the Pharisee who came to Jesus in the middle of the night to learn from the Rabbi he respected. It was simply a day of quietness and silence befitting the Sabbath mood.

Christians all over the world tend to either over emphasize Easter or overplay the sufferings on Good Friday. I know of some quarters in the Philippines where people willingly get crucified themselves that day. One of the best descriptions of emotions surrounding the day between Good Friday and Sunday is by AJ Swoboda, Professor of Theology and Church History at George Fox Evangelical Seminary and Fuller Seminary. In his latest book, "A Glorious Dark," he describes the Saturday between Good Friday and Resurrection Sunday as follows.


I call it “awkward Saturday”: that holy day to sit, wait, hope—unsure of what’s to come tomorrow. Saturday is the day that Jesus, and all understanding, lay dead. A medieval theologian, Anselm, once described the kind of faith that comes with Saturday—fides quaerens intellectum: “faith seeking understanding.” By that, he meant that faith isn't something that arises after moments of understanding. Rather, faith is something that you cling to when understanding and reason lay dead. We don’t believe once we understand it—we believe in order to understand it. Saturday’s like that: offering a day of waiting, a day of ambiguity, a day when God is sovereign even if our ideas and theologies and expectations about him are not. It is the day that our ignorance is our witness and our proclamation. Truth is, our intellect will always be one step behind in our love of God. We don’t love God once we understand him; we love God in order to understand him." (AJ Swoboda, A Glorious Dark, Grand Rapids, MI: Baker Books, 2015, p100)


It is a day in which believers are often trapped between the evils of suffering and the excitement of the Resurrection. It is a day between the gloom and bloom. It is a day where people wonder what to do with the two conflicting emotions of sadness and gladness. It is a day where not many people talked about, engaged upon, or even remembered. For most of us, it is a day in which it was business as usual. Thanks for the good times, but business as usual for us. I would say that it is that Saturday where faith and hope lay in wait together. After the humiliation and the dashing of the false expectations of the people, the disciples fled. The followers went back home in dejection. The women prepared for the Sabbath and everyone observed a quiet day of Jewish rest. We cannot fast-forward to Sunday. Neither can we remain on Crucifixion Friday. We are trapped in an abyss of Saturday not knowing exactly what to do. After all, it is also the Sabbath. 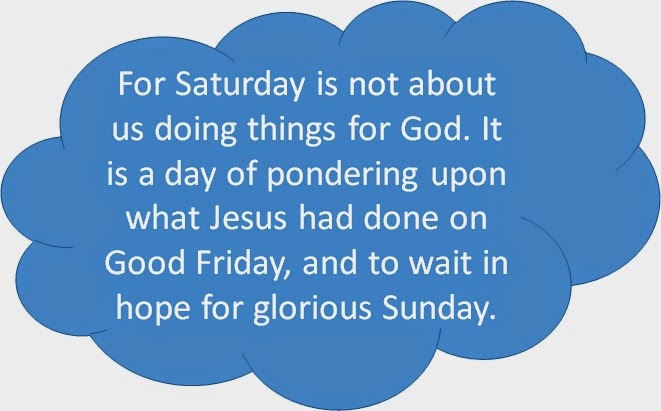 I think this is significant because of three reasons. First, the law is not done away with. Jesus came to fulfill the law, not to abolish it. The Jewish Sabbath Saturday is obviously a day of little activity for all are expected to observe the day of non-work. Like the Israelites in the wilderness, they got a double portion of food the day before which will last through Sabbath day. Even God waited and rested. Second, it is a necessary moment of reflection. It allows disciples of Christ to ponder and to reflect on the significance of the atonement. It reminds us the evils of sin and the extent of evil in the world. It expresses the deep deep love of Jesus that endured the cross, despised the shame, and suffered a horrible death. Third, as Swoboda had put it so well, it is a time where faith seeks understanding. As reasoning lays 'dead' we await the revelation of God's glory. We remain in hope that something better is coming. We get a glimpse of the middle between heaven and earth even as we pray the Lord's Prayer: "Thy will be done on earth as well as it is in heaven." He also mentions the theologian, Hans Urs von Balthasar's warning to us not to fill up that Saturday with "theologically busy" or "religious impatience" to speed up our journey from Friday to Sunday. No, we must wait. If Christ waits, as followers of Jesus, we too must wait.

For Saturday is not about us doing things for God. It is a day of pondering upon what Jesus had done on Good Friday, and to wait in hope for glorious Sunday. Take heart my friends. Don't hurry. Don't busy yourselves with things to do. Just sit, pray, and walk in step with the Spirit.

THOUGHT: "It would have been the heaviest Saturday. The unknowns. The questions. The regrets. The wonderments. No one would have chosen this side of faith. No one. Silence and ambiguity are never something we want. Of course, Jesus can be Lord and silent at the same time." (AJ Swoboda, A Glorious Dark, Baker, 2015, p116)


sabbathwalk
Copyright by SabbathWalk. This devotional is sent to you free of charge. If you feel blessed or ministered to by SabbathWalk weekly devotionals, feel free to forward to friends, or to invite them to subscribe online at http://blog.sabbathwalk.org . You can also send me an email at cyap@sabbathwalk.org for comments or inquiries. Note that views expressed are personal opinions of the author and do not necessarily represent the views of any person(s) or organization(s).