"Do not be idolaters, as some of them were; as it is written: 'The people sat down to eat and drink and got up to indulge in pagan revelry.'" (1 Cor 10:7)

Do idols have power? Are they able to wield a hypnotizing effect on people near them? Can they enter into our souls and take over our lives? Can Christians be demon-possessed?

Not unless we let them.  Sometimes, people give idols too much credit. They think that the idols have inherent power within them that they can simply zap someone into oblivion. They conjure up images of horror movies whereby the evil spirits somehow possess a person and render them zombie-like. Many Christians have also asked whether Christians can be demon possessed. Those who say "yes" will point to the many instances of "impure spirits" and exorcism done by Jesus in the gospels. The disciples also dealt with lots of cases where evil spirits were cast out of people. However, that does not quite answer the question about believers. People can be demon-possessed, but what about Christians?

In pointing out the passage of Matthew 12:43-45 where Jesus teaches us about an unclean spirit having been exorcised out of a man, goes on searching for a place to dwell in. When he finds an empty house, he will then take refuge in it. The logic follows is that there can be only one occupant. If the Holy Spirit is in a believer, how then can an evil spirit reside in an already occupied house?
According to pastors Brian Borgman and Rob Ventura, there is no way the evil spirit can come in unless we let them. Thus, their recent book on spiritual warfare argues for the armour of God to be constantly worn by believers, so that evil will not have any foothold in the lives of believers. My take is, evil spirits cannot reside in the lives of believers unless believers let them. The power of idols is large only if we empower them.

In popular culture, science fiction movies like the Terminator, The Matrix and Battlestar Galactica, are prime examples of how humans let machines run amok, after teaching the machines all the knowledge and information they need. In these movies, we see how machines began innocently as slaves to the human race. Slowly, as the intelligence of the machines grew, as they perfect their self-learning and survival instincts, the machines turned power hungry and started to see human beings as threats to their own existence. Even before these movies, we have the classic, 2001: A Space Odyssey, which essentially is a dark prophecy of how eventually machines became more manlike while man turned more machine like.

Idols are not powerful enough until we let them. That is what spiritual warfare is about. The trouble with many people is that they are unaware that we are at war. Take the modern battlefield for example. Any soldier who wades into the battleground unaware that there is a war going on is an easy target for enemies. The devil has often been called the deceiver or the accuser.  They excel in trickery and deception. They flourish whenever believers are in spiritual duress and weakening faith. Contrary to what we watch in the movies, evil spirits can do nothing until people let them. Take the example of Judas Iscariot where Satan entered him (Luke 22:3). Did Satan take the initiative to enter?

Not really. Some commentators have said that it is just a way of saying Judas has given in to the temptation of Satan. It is also likely that Judas is already an "empty house" for the devil to enter and occupy. The description of Satan entering Judas was also mentioned in John 13:27 at the Last Supper on the night that Jesus was betrayed. It is when Judas rejected Jesus, the devil seizes the opportunity to enter into Judas. Judas has allowed evil to breed inside his heart so much that he has become a welcoming house to the evil one. The idolatry of materialism and greed had consumed Judas to the point that it was better to betray Jesus and to please the religious clan.

What is happening here? How in the first place do people idolize? Looking at the passage from 1 Corinthians 10:7, we are warned not to be idolaters. The word "eidololatres" is a noun that translates as "idolaters" in most English translations. Coupled with "ginomai," the meaning is "to become" or "to be created for" makes it less of idols per se, but more of an "idolizing" posture. Why do they idolize?

I remember hearing Ravi Zacharias responding to a question of a man having sexual fantasies with women. Each time the man thought about women, he began to dream about having sex with them, especially young girls. In reply, Zacharias said that the problem is not about the girls, the prostitutes, or the fantasy itself. The problem is the man's own depraved state. When fantasizing about women, what the man was trying to do is to reduce women he fantasized with to the very same depraved level that he was on. In other words, he tried to turn women into his own fantasies. He tried to turn people from objects into the very image he was trying to create. That is the real problem of fantasies and perverted sex. In trying to meet his own needs, he had attempted to reduce the dignity of others to his same level: depraved. 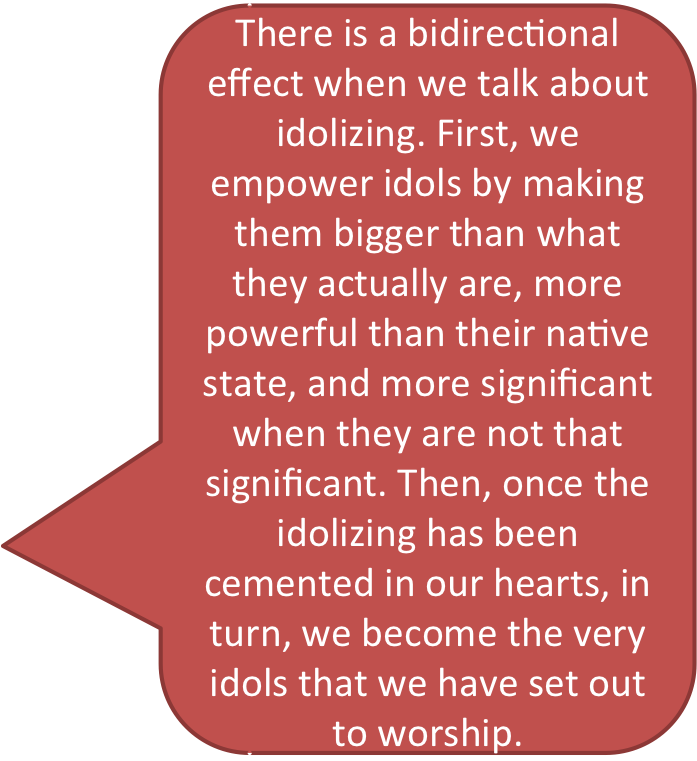 There is a bidirectional effect when we talk about idolizing. First, we empower idols by making them bigger than what they actually are, more powerful than their native state, and more significant when they are not that significant. Then, once the idolizing has been cemented in our hearts, in turn, we become the very idols that we have set out to worship. Romans warns:

"Therefore God gave them over in the sinful desires of their hearts to sexual impurity for the degrading of their bodies with one another. They exchanged the truth of God for a lie, and worshiped and served created things rather than the Creator - who is forever praised. Amen." (Romans 1:24-25)

With an idolizing heart, one gives power to things and objects, making them more significant than necessary. As man seeks to turn these things into man's own image, which is depraved in the first place, the idol will soon take a life of its own, deceiving man so that man willingly exchanged self-worth for lies, and instead of making idols serve them, ends up making themselves serve idols.

The warning in 1 Corinthians 10:7 is moot, that we learn from the past mistakes where people loved to eat, drink, and indulge in pagan revelry so much that their spiritual senses became dulled. Their self-worth became nulled. In his book, Gods at War, Kyle Idleman describes our modern idolatry as follows:


"Are we really any different? We replace God with statues of our own creation.
A house that we constantly upgrade.
A promotion that comes with a corner office.
Acceptance into the fraternity or sorority.
A team that wins the championship.
A body that is toned and fit.
We work hard at molding and creating our golden calves. I already hear what you’re thinking."  (Kyle Idleman, Gods at War, Grand Rapids, MI: Zondervan, p25)

THOUGHT: "Take heed to yourselves, because the tempter will more ply you with his temptations than other men. If you will be the leaders against the prince of darkness, he will spare you no further than God restraineth him. He beareth the greatest malice to those that are engaged to do him the greatest mischief. As he hateth Christ more than any of us, because he is the General of the field, the Captain of our salvation, and doth more than all the world besides against his kingdom; so doth he hate the leaders under him, more than the common soldiers: he knows what a rout he may make among them, if the leaders fall before their eyes. He hath long tried that way of fighting, neither against great nor small comparatively, but of smiting the shepherds, that he may scatter the flock: and so great hath been his success this way, that he will continue to follow it as far as he is able. Take heed, therefore, brethren, for the enemy hath a special eye upon you." (Richard Baxter, The Practical Works of Richard Baxter Vol 4, London: Paternoster, 1838, p373)