4At this they wept aloud again. Then Orpah kissed her mother-in-law goodbye, but Ruth clung to her. 15“Look,” said Naomi, “your sister-in-law is going back to her people and her gods. Go back with her.” 16But Ruth replied, “Don’t urge me to leave you or to turn back from you. Where you go I will go, and where you stay I will stay. Your people will be my people and your God my God. 17Where you die I will die, and there I will be buried. May the Lord deal with me, be it ever so severely, if even death separates you and me.”

KEY: Following last week's article on the male gender, this week I will cover what it means to be feminine, and what makes the woman a true woman in the light of biblical truth.

I am no psychologist. Neither am I some love doctor or emotional therapist. I am simply a trained scholar, eager theologian, an associate pastor, and of course, a husband as well as a father. I am also a wide reader, reading on the average a book every other day. I am interested in a wide range of issues, from marriage to theology; families to individuals; children and teens; aging and diseases; spirituality as well as religious matters; current affairs and various trends in society and culture; etc. In fact, my reading passion has taken me to many places, without having to buy an air ticket or to travel long distances just to learn. The Internet and technology have helped bridged the far and the near together.

Why am I sharing all these? That is because in my line of work as a pastor, I come across many different issues, and faces different and unique challenges. Marital problems, Church member to member relationships,  Sunday services, leadership matters, spiritual growth, counseling, visitation, meetings, Bible teaching, administration, and many more are the mainstay of any pastoral ministry. It is because I am called to preach on a regular basis that I need to read a lot as well.

Last week, I wrote about  issues pertaining to the male gender, where being a real man is not exactly about what they do, but is essentially about making a difference with their lives. I mentioned four kinds of men, giving due weight eventually to the fourth kind that defines what a real man is about. The defining moment for a man is that innate commitment to glorify God regardless of how good or bad the struggle is. Whatever it takes, the Christian man will make a decision for God. That is why many men in particular find special meaning in Rick Warren's purpose driven life.

This week, I like to share what I have learned about the female gender, and what it means to be a woman. I know, I am not a woman, so I am not exactly biologically qualified. Come to think of it, if only women deal with women issues, then men can never be gynaecologists. It is important for men to know about female issues too.

Like last week, let me borrow again some observations from a trained psychologist, Dr Larry Crabb, once again.

A) What is Femininity?

According to the Hebrew word for female, neqebah means "punctured, bored through." Based on the Hebrew understanding of this word, Crabb writes that being feminine essentially means being open to, inviting, and neither demand nor control, but to be relational. More importantly, the original design for femininity is for receiving from God's fullness, that the woman be able to reflect the full character of God and for the purposes of God. Such a relationship is life giving and nourishes relationships.  So like man's greatest fear is to lose his sense of purpose and direction, woman's greatest fear is the breaking down of relationships. Crabb also talks about the four personas that inhibit the woman from being fully feminine. This is especially true of those who reject a Christ-centered relationship.
B) Fear of Unsatisfied Desire (The Defensively Deranged Woman)

A few weeks ago, while shopping with my family at an Asian supermarket, I walked past a woman in her 50s, complaining in Cantonese about a man who had mistresses in mainland China. Speaking as if she was cursing her husband in front of her, it was quite easy to see that she had been traumatized by an adulterous man, most likely her husband. I wonder to myself why she behaved like a mad woman in public. Has she been so hurt that she had become consumed with hate for her husband? Then there are also women I have encountered who had such a horrible relationship with their fathers that they transferred the trauma into their marriages.

Crabb also shares about one woman whose husband on their wedding night preferred to watch a football game than to have sex with her. When the wife woke up the next morning, her husband then said that he "screwed" her when she was sleeping. Angry and frustrated, the relationship went downhill, with the woman quickly becoming a seductress, unable to heal from her brokenness. The defensively deranged woman is not able to recover from a broken past toward healing, as her focus is often on revenge, on bitterness, and on hate.

The other extreme is also unstable. Crabb talks about the woman who lives on blessings alone. They let their joy be tightly linked to blessings of good marriage, good kids, good social circles, to define what a good life is. In their overwhelming trust in these good things, it also means the focus is away from building trust in God alone. Such a woman embraces only the good, and refuses to accept the bad. The relational aspect gets compromised as instead of building a relationship with God, the prematurely satisfied woman builds her relationships on blessings alone. It takes the godly woman to be able to trust in God whatever the good or the bad.

Like men, anger is an emotion that impacts woman a lot. A woman undergoing pain and painful memories may hide their anger through numbing one's emotions. The "tough lady" image is popular. Toughness is not the issue. Unnatural dealing with anger is the issue. By allowing her sense of "I should have been better treated" to dominate her life, she unwittingly starts to control other people's lives. Some mothers attempt to control their sons and daughters under the guise of doing what is best for them. The trouble is, it can backfire. Their biggest hurt or regret comes when they realize that their adult children are not willing to share openly with them their real struggles. With the female gender that is high on relational matters, it hurts when the closest relationships are not close at all.

The first three types of women continue to play hide-and-seek with themselves and their emotions. If there is a common trait, it is a fear of their broken relationships that lead them to performing lots of hiding and little of seeking. The defensively deranged woman hides her past hurts with emotional and mental instability. The prematurely satisfied woman hides her true needs by becoming absorbed in the good things of life. The angrily hardened woman hides her fears through grit and controlling behaviours. It is the fourth woman that is most feminine in the biblical sense.

This fourth type is what Crabb describes as self-aware and God-oriented. Most importantly, she does not hide. She faces boldly her fears and trusts that God will help her. It is this disposition that defines the godly woman:

"God, I come to You. Do with me as You want. Embrace me in Your perfect love that casts out all fear.” 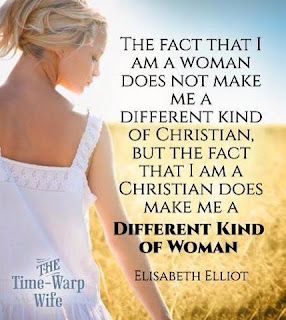 The story of Ruth is an excellent example of a visibly troubled woman who chooses the God of her mother in law, even after the passing of her husband. Knowing that her status is low, and her hope is bleak, she clings on to a faithfulness that is anchored in God alone. Some say that her desire is to be a faithful daughter in law. Others say that she had no better decision to make. I think not. Firstly, Ruth had every right to go marry someone else. Becoming a widow was an accepted state in society. There was no shame. Secondly, Ruth could have returned to her own homeland, just like Orpah. The fact that Ruth chose to stick with her is a conscious decision. More importantly, we note that Ruth does not need to choose God. Yet, she makes a conscious decision to bind her heart to God. With that decision, God blesses her with one of the greatest blessings ever: Bloodline to King David.

Being feminine is not about good looks or biologically features. Being feminine is relational. It is being invited into building that relationship solely and solidly in God alone. The best woman one can ever become is to be a woman of God. A woman of God will be a deep source of blessings to all around. Let us pray for our women friends and family that they too can be the women of God that they have been called to be.