“The two choirs that gave thanks then took their places in the house of God; so did I, together with half the officials,” (Nehemiah 12:40)

MAIN POINT: Thanksgiving is more than a ‘Thank-You.’ Three lessons to learn from the meaning of 'Todah.'

A story is told about Michael the Archangel giving 2 angels the responsibility to travel around the world to collect requests from people. The first angel carries a basket labeled: “Prayer Requests.” The second angels carries a similar basket, but is labeled: “Thanksgiving.” Within minutes, the first angel returns with a basketful of prayer requests. The first angel decides to wait at heaven’s gate for the second angel. Minutes creep to hours. Hours become days. After more than a week, the second angel returns with only a few scraps of paper. Unlike the first angel where prayer requests come fast and furious from a world every hungry to have their needs met, thanksgiving seems to be hard to find. The second angel has to rummage through the far corners of the earth just to get the few miserable pieces of thankfulness. 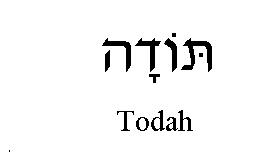 The question is why are people so generous in dishing out prayer requests, but are such misers when it comes to thanksgiving?

We live in a world that is constantly consuming, ever wanting, and not easily contented. People spring to bargains that offer a buy one get one free. Others are not contented with a 5% salary increment. Many people in the business world have unconsciously bought in to the subtle temptation: "Greed is good," first made famous by the character played by Michael Douglas in the 1987 hit film: "Wall Street." These are the famous words from the movie.


The point is, ladies and gentleman, that greed -- for lack of a better word -- is good.


Greed clarifies, cuts through, and captures the essence of the evolutionary spirit.


Greed, in all of its forms -- greed for life, for money, for love, knowledge -- has marked the upward surge of mankind.

In a culture of greed, thanksgiving is an unwanted currency, treated as worthless as pennies to be cast aside.

Some use the pursuit of excellence to disguise covetousness. Others simply do not know how much is enough. ‘More’ seems to promise satisfaction, but is ultimately never enough. Yet, statistics reveal that greed is a universal trait that is irrespective of language, race, religion, all over the world. It is this insatiable greed and wanting for more, that ultimately results in a less than grateful heart. The way to be thankful is to learn the essence of 'todah,' the Hebrew word for thanksgiving.

In Neh 12:40, we read about the choirs taking their stand to worship God. This is an active thank you. The Hebrew word for ‘thanksgiving’ is ‘todah.’ If you speak Hebrew to a Jew, ‘todah rabah’ is the rough equivalent of “Thank you very much.” Yet, there are uniqueness to the Hebrew rendition of thanksgiving. At least three possible meanings can be understood. Firstly, even though ‘todah’ is a noun, ‘todah’ usually requires an action. Hands are often used to express ‘todah.’ 'Todah' is an active expression of our hearts.

I remember visiting a tribe that practices warm greetings with a hug, as well as with hand gestures. The leader that I met with, gives me a beautiful hand-shake of gratitude for visiting his village. First, he hold my hand with his two palms. Then he gently cups his fingers together and touches the left side of his breast. (This symbolizes a heart-felt thankfulness). Finally he lifts his hands to touch his forehead. (This symbolizes a mindfulness of gratefulness).

When I compare such gestures with the frivolous manner in which words are used in the West, I feel somewhat embarrassed that in the West, we use ‘thank-you’ not only cheaply, but meaninglessly. It is a good habit to teach children politeness and courteous behaviour. Unfortunately, in a culture of consumerism, thank-you becomes a necessary means to attaining one’s wants. It is expected that when one is being served anywhere, that a word of ‘thank-you’ be mentioned. It is only proper. It is expected. It is ingrained into the culture. Unfortunately, it often comes across as mere words to lace a transaction. There is often nothing meaningful beyond ‘thank-you.’ For the Hebrews during the times of Nehemiah, the thanksgiving does not come cheap. This brings us to the second meaning of ‘todah.’

B) ‘Todah’ as Sacrifice
Meaning #2: 'Todah' in thanksgiving is sacrificial.

The second meaning of 'todah' is the element of sacrificial service. As an exiled people, the Jews has to obtain permission from the Persian authorities in order to return to Jerusalem to rebuild the walls. Thankfully, Nehemiah as the cupbearer to King Artaxerxes occupies a special position in the palace. Unfortunately, other members of the Persian hierarchy, like Sanballat and Tobiah questions the decision even to grant the Jews permission to return to Jerusalem. Thus comes various protests, plots, and persecutions against the Jews. For an exiled people with highly limited freedom, how can the Jews survive the ruling powers’ persecutions? The only way is to pray and to depend on the LORD for deliverance. Nehemiah chapter 12 is the climax that recognizes that the completion of the wall rebuilding project is only possible because God has enabled them.

Thus, the exilic community makes meticulous plans to worship and honour God. They tithe. They give their firstfruits. They gather as one body to give thanks. They offer sacrifices in accordance to the requirements of the Law. For all these to happen, everyone makes a significant sacrifice. Sacrifices of gladness, of praise, of joy, and of thanksgiving. It is recorded:

“and on that day they offered great sacrifices and rejoiced because God had given them great joy, even the women and children rejoiced, so that the joy of Jerusalem was heard from afar.” (Neh 12:43, NAS)

C) ‘Todah’ as Singing in praise and worship
Meaning #3: Todah as thanksgiving is a JOYFUL expression of faith.

Todah as thanksgiving is also linked to a third meaning: JOY. There is an old Messianic saying that when the Messiah comes, there will be no more need for sacrifices, except sacrifices of praise and worship. The joy of Jerusalem at the dedication of the walls to the LORD, can be heard from afar. This third meaning of ‘todah’ extends beyond the human realm of words, sacrifices, and actions unto worship. In the spirit of worshiping God, one expresses ‘todah’ in gratitude. In the same spirit, one’s rejoicing can become infectious as it is heard from afar.

Sometimes I feel that when we worship, we tend to pay lip service to God. When we do not feel good, we stop singing. When we are unfamiliar with the songs, even though we can read the words, we refuse to sing along. This is most unfortunate. Singing songs of worship is never about words or melodies. It is always the heart of thanksgiving.

Some of us may be thinking about how singing can spread beyond the four walls of the Church. Like the saying, 'charity begins at home,' praise of thanksgiving begins in the Christian community gathered each Sunday. When the new week begins, go into all the world with a grateful heart.  Your thankfulness may turn into a very effective witness for the glory of God.

How can we become more thankful in our hearts? Let me suggest three approaches. Firstly, reflect on the past and highlight moments that the LORD has carried you through, against all odds. I remember a time when I failed my school examinations and have to repeat the entire year. It was terribly lonely. Often, I feel as if it is the LORD and I against all other adversities. I look back, and I am thankful that the LORD has encouraged me in the Word, and has used many faithful brothers and sisters to minister to me during those difficult times.

Secondly, just think about when was the last time we have given meaningful thanks to God for what we already have. Have we thank God for the job we have, or the peaceful country we live in? Have we thank God enough for the family of ours, and the social networks we have? Thankfulness is something that we feel fulfilled when given away. Strange stuff. It is a sign of humility. It is a show of gratitude. It is an evidence of being a follower of Jesus.

Finally, for those of us who tend to seek more prayer requests than thanksgiving, ask if we are practicing a lop-sided form of Christianity? What will we make of a person who always asks for things from society without learning to give back to society? Will that person resemble a religious beggar? No! We are in Christ. If our heavenly Father is rich, why do we as children of God behave as if God is so poor? In fact, a lack of thanksgiving is one terrible sign that we do not trust God.

Though we depend on God to grant us favours, we can always give back by being thankful. In Luke 17, out of the ten lepers who were healed, only one came back to give thanks. That is a paltry 10% return in terms of thanksgiving.  My dear reader. May I challenge you to change the statistics. For any occasion, at any opportunity, will you be that one to give thanks first? Will you be more thankful in a thankless generation? Will you begin to give thanks for everything, knowing that it is God's will for you in Christ Jesus?

THOUGHT: "If you concentrate on finding whatever is good in every situation, you will discover that your life will suddenly be filled with gratitude, a feeling that nurtures the soul." (Harold Kushner)

Copyright by SabbathWalk. This devotional is sent to you free of charge. If you feel blessed or ministered to by SabbathWalk weekly devotionals, feel free to forward to friends, or to invite them to subscribe online at http://blog.sabbathwalk.org . You can also send me an email at cyap@sabbathwalk.org for comments or enquiries.
Posted by Sabbath Walk at 8:00 AM

Email ThisBlogThis!Share to TwitterShare to FacebookShare to Pinterest
Labels: Thanksgiving