44It was now about noon, and darkness came over the whole land until three in the afternoon, 45for the sun stopped shining. And the curtain of the temple was torn in two. 46Jesus called out with a loud voice, “Father, into your hands I commit my spirit.” When he had said this, he breathed his last. 47The centurion, seeing what had happened, praised God and said, “Surely this was a righteous man.” 48When all the people who had gathered to witness this sight saw what took place, they beat their breasts and went away. 49But all those who knew him, including the women who had followed him from Galilee, stood at a distance, watching these things. (Luke 23:44-49)


This Holy Week, the following came to me: 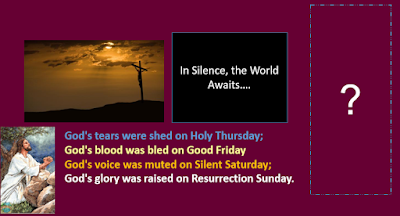 As far as man are concerned, they view Jesus not from God's perspective but from the world. On Thursday, the disciples were still oblivious to what was going to occur. They ate bread and drank wine together with Jesus. Their feet were washed. They were served. They were prayed for. Little did they know that among them was Judas Iscariot who would not only betray their lord, but would be the first of a long list of people who would desert Jesus.


On Friday, Jesus was tried, humiliated, crucified, and was buried. The crowds cheered and the mobs jeered. Some people cried but were easily drowned out by taunting noises. Though Jesus was nailed on the cross, together with two other convicted thieves, he felt alone. Deserted by the people, deserted by his disciples, and deserted by His Heavenly Father.

On Saturday, hardly anything happened except the grief and silence of a day filled with gloom. The Rabbi had died. The Miracle-Healer was gone. The Teacher was no more. Even the four gospel writers did not have much to write about on this Silent Saturday.

During the 19th Century, the North American slaves took the Friday mood to heart as they sang the negro spiritual, Were You There.


The haunting melody repeats itself over four stanzas, moving from the time Jesus was crucified, to the moment Jesus was nailed, the excruciating torture of the pain, and the dark clouds that reflect the spiritual forces of darkness that seem to be winning the spiritual battle. Man's response was simply to tremble. Tremble at the unreasonable circumstances and plots leading to Jesus' conviction. Tremble at the unholiness of man that nailed Jesus at the cross. Tremble at the unimaginable horror of bully and humiliation of a man who did nothing wrong. Tremble at the anger of God up above, whose full force of justice and righteousness for the punishment for the sins of man, were fully meted out on the body of His only Son.

So we wait. The words of AJ Swoboda are instructive.


"Friday is the day we own up to our part of the evil in the world. It's the day I admit my culpability, my part, my doings in the system of darkness. It's the day I look up at Jesus as the one I've nailed to the cross and stops blaming everyone else for the nails in his hands. On Friday, the buck stops here." (A.J. Swoboda, A Glorious Dark, Baker Books, 2014, p15)

Thank God, that the world did not end that Friday. Neither did it pause on Saturday. For then came Sunday.

THOUGHT: "Even the darkest night will end and the sun will eventually rise." (Unknown)