As the Spirit Leads - Reflections on Power

A) The Seduction of Power

Like nooses that render one helpless like a donkey, power makes one weak on the knees as the heart gives way to the potential benefit of power. The famous words of Darth Vader in Star Wars also refer to power: "Come to the dark side" and "You don't know the power of the dark side."

The star in the movie, Luke Skywalker was also intrigued with the powerful dark side when he asked Yoda his teacher: "Is the dark side stronger?" Yoda replied gently: "No, no, no. Quicker. Easier, more seductive."

The use of power is key to getting things done quickly in many societies. The movie, "The Story of Qiu Ju" (starring Gong Li) tells of a pregnant village woman (Qiu Ju) trying to find justice in a sea of powerful establishment. Angry at how the village chief kicked and hurt her husband on the groin, resulting in severe pain. Just watching the movie tells us a lot about the use of power in the Chinese culture. If one is a nobody, a weak peasant, a woman, or a marginalized person, it is hard to get things done. People brush one aside like fluff. They trample on the weak like leaves that dropped on the road. However, when they hear a serpent hissing, they stop their tracks. When they see a dalmatian growling, they freeze. When the king or president of the country travels, the roads that you normally drive in are immediately closed so that the royal or official entourage can pass.

In countries where corruption is rampant, if one does not have the right connections or know the right authority, it is quite impossible to get things done. Even issuing passports can be expensive. If one refuses to pay top dollar for quick processing, following the regular process can be extremely long and frustrating. Just one bribe to the man in charge and the passport could be renewed within 24 hours. Gang members drop names to tell others about who they are dealing with.


B) Put Not Power on the Pedestal

The Roman centurion in Luke 7 understood precisely this when he admitted to Jesus about his power position. Before Jesus, he was feeling out of place, and unable to use his very power to order Jesus around. For he knew that all of his power and authority cannot save his sick servant. Being humbled at the limitations of his power, he had to approach Jesus with utter humility.


"That is why I did not even consider myself worthy to come to you. But say the word, and my servant will be healed. For I myself am a man under authority, with soldiers under me. I tell this one, ‘Go,’ and he goes; and that one, ‘Come,’ and he comes. I say to my servant, ‘Do this,’ and he does it." (Luke 7:7-8)

The powers of the world are totally opposite from the power of the Spirit. As the Spirit leads, true power is often not about taking up, but about letting go. It is not about grabbing things for ourselves but giving them away to help others. It is not just things but a ministry of touching the heart. Jesus was touched by the faith of the Centurion, where the powerful soldier of authority willingly humbles himself before Jesus and submitted to the wishes of Jesus. The Pharisees fail to see that, instead, preferring to dictate what Jesus can or cannot do; when Jesus can or cannot heal; what Jesus can or cannot say; and failing which, they conspire to put him down. In fact, it is the very fear of losing power and influence that the religious leaders of that time feel threatened by the ministry of Jesus.

C) Power Corrupts from the Outside In 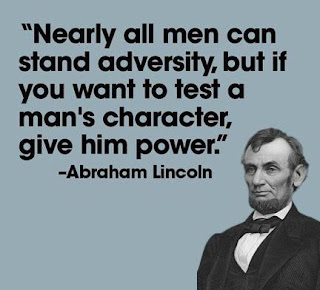 When we give in to power, the image of the dark force in Star Wars can remind us of how we can turn to the dark side so easily. How does the Spirit leads us? How do we know when the Spirit is leading us? Let Romans 8 guide us. Romans 8:5 warns us about where our priorities of life are. The clue to where our hearts are lie in what our desires seek after.

Power is one such thing. Like what Yoda from Star Wars said to Luke Skywalker, that the use of power is quick, the gaining of power is easy, and the presence of power is seductive. Like what some people tell me: "It's not a matter of your abilities. It's whether you want it or not."

What do we do when we are in a position of power? This is where I believe it is important for us to remember that we are not what the power tells us to be. We are what God says we are.

D) The Spirit Leads Us With God's Power to Bless

This week, my son received his commissioning charge from the President of Singapore. The entire event was conducted with military professionalism, discipline, and pride. The 582 officer cadets all attained the rank of second lieutenant, qualified and authorized to be leaders in their respective vocations in the military rank and file. As commissioned officers, there is considerable power and authority in what they say and do. With the sudden rise in power, it is extremely easy to succumb to pride and even abuse. I shared my thoughts with my son: "It is not the rank that determines who you are. It's who you are that brings credit and honour to the people you serve with."

The vices of the flesh all tempt one to become individualistic and self-centered. The virtues of the Spirit encourages us to become more other-centered in line with Paul's exhortation:


"3Do nothing out of selfish ambition or vain conceit. Rather, in humility value others above yourselves, 4not looking to your own interests but each of you to the interests of the others." (Philippians 2:3-4)

On the flip side, I am aware of people who are so afraid of power that they shun it. They refuse to accept it because of all the negative connotations surrounding it. The phrase: "I hate politics" is a reference to the dislike of anything to do with power struggles. The truth is, it is not power that is the threat. It is sin. When we use power for our own benefit, that is where the dark side is most prominent. When we use power for blessing others, that is where the Spirit's presence can be felt. Learn not to see power as something to be shunned but a gift to be received with open hands. See it as using our positions of power to ensure justice, fair play, and goodwill. Above all, use all the powers we have to serve others. Just like Jesus, who despite being a King, chooses to be a servant. Having all riches in heaven, He chooses to be poor. Even though He is powerful, He chooses to be meek and endured the temptations in the wilderness. In doing so, Jesus shows us what true love is. The use of power comes under this umbrella. Love one another just as God loved us.

THOUGHT: “We should never forget that everything Adolf Hitler did in Germany was ‘legal’ and everything the Hungarian freedom fighters did in Hungary was ‘illegal.’” (Martin Luther King, Jr., Letter from Birmingham Jail, 1963)