Spiritually Rich - On Things That Matter


25“But Abraham replied, ‘Son, remember that in your lifetime you received your good things, while Lazarus received bad things, but now he is comforted here and you are in agony. (Luke 16:25)

In the Parable of the Rich Man and Lazarus, Jesus contrasts two scenes, and two worlds of richness and poverty. In the first scene (this life on earth), the unnamed rich man is presented as one who enjoys the luxuries of life, who is well-dressed with fine linen and has fine-dining daily. He lives the good life and appears to reside in a castle-like residence. He lives "in luxury every day." If he is in our modern world, I could think of him having the best of everything for self. He could be eating a lobster a day or had lots of choices about which tuxedo to wear when he goes out. He could have an indoor swimming pool or an elaborate exercise equipment. He could also be rubbing shoulders with the ruling powers of the day, meeting in high places and lazing around at posh resorts. Who knows, he could be playing golf with the Presidents or CEOs of major corporations of the world. Just a swipe of his credit card on a big purchase could render him frequent flyer miles that benefit his entire household. Life is good. So good that matters of poverty and injustice in the world do not register even a single thought of care or concern. People who are rich and powerful tend to have blind spots about the rest of society.

Almost immediately, Jesus switches channels to zoom in on Lazarus, who not only sat at the gates of the rich man, he had sores so painful that he needed the dogs to moisten the wounds with their tongues. Hungry, he was willing to settle for any crumb that fell on the table. I am not even referring to leftovers. Crumbs are like bits of food that would be discarded anyway. Like rats or stray cats that snatch away any food that falls on the ground, he longed for those crumbs. If the rich man is the epitome of luxurious living and wanton splurging of wealth, Lazarus is the symbol of poverty and a life nobody wants.


At the second scene (afterlife), the roles are reversed. Instead of Lazarus having dogs to lick his sores, it is the rich man having flames licking his body and soul. So tormented is the rich man that he pleads for a tip of mercy, from the finger of Lazarus. That is most preposterous! It seems like the rich man has not really learned what it means to be humble. Even in the afterlife, he is still unrepentant, wanting to savor the very things he once enjoyed. Licking from a finger instead of settling for crumbs. Why not ask Lazarus to spoon-feed him instead? If we stretch it even further, why not ask God to give him back all of his earthly comforts of life? Proverbs 10:3 tells us: "The LORD does not let the righteous go hungry, but he thwarts the craving of the wicked."

The craving of the rich man will be thwarted. While Lazarus was suffering on earth, did the rich man ever send his servants to give food to him? No. How dare then can the rich man even ask for a personal treatment by Lazarus himself! The rich man fails to do all the good he can when he had the chance. He prefers to heap loads of food for himself, oblivious to the hunger right outside his gates. He does not even need to think of Africa or far away lands in Asia. All he needs is to open his eyes and to see what is outside. Even if he does not donate millions of dollars to World Vision or to the Red Cross, he could have offered a decent bowl of soup to a hungry beggar. If he is righteous in the first place, he would never let the beggar starve. 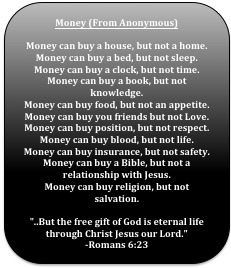 There are three ways of being spiritually rich. None of them has to do with material goods or worldly reputation. All of them have to do with learning to see things from God’s perspective. The first is to recognize that being rich is not about getting but giving. Offering a big donation tells us not about the size of the donation but the size of the HEART that makes donation all possible in the first place. Think about the special place of seeing someone else getting blessed because of our giving or of our serving. I once prayed at a Church camp that I organized, that God would reward me for my efforts by showing me at least one life that was changed. God was so gracious to show me several. That feeling that I received was something that no amount of money could ever buy. Those who give, experience a richness inside their souls that words cannot describe. Such a “rich attitude” requires constant honing and intentionality. One reason why many people fail to find joy in their lives is because they have become too fixated on self-needs. For happiness and joy are elusive things behaving like the weasel that slips away no matter how hard we grasp at them. Instead, happiness is one of those things that cannot be obtained by constant pursuing. They can only be received by grace, not through a race.

Secondly, being rich is not about relying on temporal stuff but trusting in things of eternal value. Come to think of it, the crazy shopping atmosphere leading to Christmas Day are all based on the erroneous philosophy: That more possessions bring happiness. We all know that things cannot buy happiness. As one saying goes, money can buy you a house but not a home. For houses after a while will need renovations. Cars depreciate. Reputations wane after a while. Like technology, the latest and the greatest today is obsolete tomorrow. A friend of mine said to me that the moment the gadget gets produced in a production floor, it is already obsolete. Look toward things of eternal value and invest totally on them. I mean totally. Half-hearted investment will be like a drop of ink in a gallon of water.

Thirdly, being rich is always about relationships. The greatest commandment of loving God and loving our neighbor have no references to worldly pursuit of fame, riches, or power. The tragedy of life is how people push and shove to become successful in things that ultimately do not matter. I know of a friend who lost his dear son at a tender age of 15. Each year, he would make a trip to his son’s tombstone to remember the good times. As he pondered upon the what-ifs of life, what if the son had not died, what if he as a father had done more, and all other scenarios, it becomes like a confusing mixture of hope and helplessness. He could have spent more time with his son and less time pursuing his career. He could have brought him to Disneyland or enjoy a father-son hiking trip they had talked about many times. They could have done a lot of things together. Death is a cruel blow to the hopes and dreams of many who procrastinate on the essentials while pursuing things that are of secondary importance. If you have that time, spend it well. If possible, on relationships.

On the other hand, how many of us are in the position of the rich man? How may of us are living in luxury each day, eating well, drinking plenty, playing in posh places, and living the good life? If we are, perhaps, we need to ask ourselves. Are we giving according to Jesus's warning, that more is given, more is expected of us? Are we focusing more on things eternal, like what Matthew 6:33 tells us, about seeking first the kingdom of God and his righteousness? Are we spending time building relationships with whatever we have?

The choice is yours. Only yours.

THOUGHTS: "My wallet is one crucial form of God’s provision within my life. It enables me to take care of my family and myself and to serve others. My intent for deploying its contents is to be focused on others, not on myself. I am responsible for asking myself daily, “How can I live more simply so that others can simply live?”" (Mike Slaughter, The Christian Wallet, Westminster John Knox Press, 2016)