15Make sure that nobody pays back wrong for wrong, but always strive to do what is good for each other and for everyone else. 16Rejoice always, 17pray continually, 18give thanks in all circumstances; for this is God’s will for you in Christ Jesus. 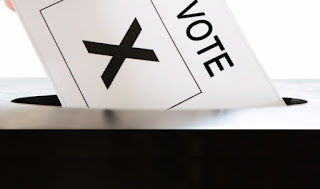 As the country of Singapore prepares to vote at Elections 2015, it is time to commit the future of the country to God. One of the catchphrases of the elections is "Vote wisely." It has become so overused, so cliche, and so dull that it does not really mean much to the common man anymore. If a politician tells you that, it is a veiled instruction to vote him/her. If a staunch party activist says it to you, it means to vote for the party that he/she supports. If a passionate advocate for a particular candidate says that to you, it means to cast your vote for his candidate. If a preacher tells you that, especially when he has publicly made known which political affiliation he takes, there is a good chance that hearers of his sermons may vote the same way as him.


Two words that mean so many different things to so many people. Most unfortunately, "vote wisely" has become a condescending tool that can manipulate and direct people about what to do with their votes. Here is my retort: Your vote is secret. It is also sacred. It is secret because no one is going to look over your shoulders when you mark your choices. Unless of course, you go around publicizing what you choose in public arenas like Twitter and Facebook. It is secret because the laws of the land have guaranteed it.  It is secret because nothing is valid except the actual cross sign made on that very moment when you step into the balloting room. For all the past talk and behaviours, no one knows who you choose. One can change one's mind about who to vote. One may choose to spoil the vote. One may insist that the opposition must be given a fresh opportunity. Another may think that it is important for the incumbent to be given a second chance. Whatever it is, it will be secret to you and only you, the voter.

Your vote is also sacred. That is because it has to do with exercising your sovereign right to choose who you would like to represent you. Nobody can take away that right, unless you choose to give it all up. There is no need to fear. The vote is completely within your right for self-expression. Do not let politicians or policy makers try to coerce you to do things against what you truly feel. The sacred vote must reflect how you truly feel, and not what you fear. Forget about what others have been telling you. It is your choice.

My fellow readers. Whichever elections that you are preparing to vote in, wherever you live, let me submit to you an alternative to the "Vote Wisely" cliche: Vote Prayerfully.


We pray for Your will to be done in heaven as well as on earth, and for this day, we pray for the nation of Singapore. We pray that Your will be done for the sake of all the people, regardless of race, language, or religion. For You have caused rains to fall upon not only the righteous, but also the unrighteous, and the many in-between. We are sinful. We have been hurt. We have also hurt others with our careless words and social media interactions. Forgive us O Lord.


With gratitude for Your Grace and Goodness, we come to You with thanks for the many years of good work done by the ruling parties. We are grateful for alternative views and the rise of a new generation who would have to decide on the next five years, who they would like to be their members of parliament. The stakes are high, as what many politicians had warned, but as far as You are concerned, they are never higher than Your stake on the whole of mankind. You have given us Your Son as a demonstration of Your Love. We are grateful. In Christ, we are humbled. In Christ's Resurrection, we are hopeful. In Christ's love for the Church, we are honoured to be called Your children, Your bride, Your love.

I pray that they will not just vote according to their conscience, they would also vote with the overall community in mind. They need Your wisdom. They require Your guidance. Especially for my fellow brothers and sisters in the faith, I pray that they would vote freely and prayerfully.

Before entering the polling booths, grant them clarity of thought. Grant them an undistracted view of who they have decided to vote for. Grant them the will to choose in accordance to what they heart tells them to.

As they enter the booths, provide them a moment of peace and serenity, to bask in the sacred space of them and the ballot box. Walk with them as they proceed to collect their voting slips. For the undecided, help them not to rush into a decision that they may regret later. Guide them toward making a decision that they would have the courage to take responsibility for. No matter what happens.

As their pens are about to press on the paper, grant them certainty. Let there be no fear or hesitation about their choice. Help them to be proud of exercising their right to vote, regardless of who they vote for. Give them assurance that the vote is their choice. Nobody can tell them whether their choice is correct or incorrect. Let them know that the choice they make is completely lawful.

After they vote, give them peace, not regrets. Give them comfort, not confusion. Give them an assurance that they have done their duty and have exercised their right to decide on the best candidate for them.

We pray all of these, in Jesus' Name. Amen.


THOUGHT: PRAYER OF A CONFEDERATE SOLDIER

I got nothing that I asked for, but everything I had hoped for.
Almost despite myself, my unspoken prayers were answered.

I am, among all men, most richly blessed.