What Would You Ask For?

At Gibeon the Lord appeared to Solomon during the night in a dream, and God said, “Ask for whatever you want me to give you.” (1 Kings 3:5)


The story of Solomon begins well but ends badly. Most of us would remember how God was pleased with Solomon, instead of asking for wealth or anathema for his enemies, he asked for wisdom and discernment to rule the country. It seems like a sudden appearance from God. Suppose God were to appear before you in a dream and said to you: "What can I give you? Ask." What will you ask for?

There was a joke about a man who found a bottle with a genie inside. Upon rubbing the bottle, a disgruntled genie appeared. "Alright, since you've released me, I'll will have to do the genie obligation. However, times have also been tough for the genie world, I can only grant you one wish of my choosing."


The man was pleasantly surprised, but since he had been following the news about the problems in the Middle East, he opened a map, pointed to the Middle East and asked for peace between the warring parties. The genie looked at him with eyes wide open. "That might be a little too difficult. I've to deal with the Palestians, the Iranians, the Syrians, the Yemens, the Arabians, and the whole line of tough countries. Make another wish."

The man then thought about his unsuccessful search for a life partner. He then said: "OK then. I wish for a beautiful woman, who would be the most caring, most loving, most faithful, and will respond to each and every request I make."

The genie stared with eyes even wider than before. He shook his head, releasing a disgruntled sigh and said: "Gimme that silly map!"

Unlike the genie, God is more than able to give us whatever we ask. The question is, will we know what is the best thing to ask for? Remembering that we are sinful people, even the requests we make are subject to the weaknesses of our thoughts and our feelings. If God were to ask us, what would be our request? Will it be a million dollars or more? Will it be something around the category of fame, fortune, and fans? Or will it be something more general like beauty pageants' regular pronouncements of "World peace?"

I don't know about you. I would have panicked like a silly squirrel, and scurried under my blanket. How can puny little me look straight into the face of an awesome God? What nerve do I have to ask for something when I am not prepared. I have tonnes of things I could ask, but I am just unsure of what exactly I would ask. It is all so strange and surreal. Solomon was pretty cool, calm, and collected. Instead of a laundry list of things to rattle off, he pops the one thing that pleases God.


Solomon answered: “You have shown great kindness to your servant, my father David, because he was faithful to you and righteous and upright in heart. You have continued this great kindness to him and have given him a son to sit on his throne this very day. 7“Now, Lord my God, you have made your servant king in place of my father David. But I am only a little child and do not know how to carry out my duties. 8Your servant is here among the people you have chosen, a great people, too numerous to count or number. 9So give your servant a discerning heart to govern your people and to distinguish between right and wrong. For who is able to govern this great people of yours?” (1 Kings 3:6-9)

B) Three Tips in Asking Well

There are three things we can learn from Solomon's asking. The first is to know the self. Recognize one's true condition and one's limitation. When asked, Solomon confessed his own limitations as "only a little child." Having just ascended his father's throne, he was in need of spiritual guidance.  It must have dawned upon Solomon the immense task of governing a "great people of God." Filling the shoes of his father David was no easy feat. David was specially chosen to be the king of Israel. Even today, the name of David is revered as the greatest king Israel had ever known. Caught off-guard, it is perhaps wise to fall back to our smallest selves and to remember once again, before a big God, we are nothing. We are completely dependent. We cannot depend on our own strength. Imagine Solomon were to try and argue with God? No way he would win. In that situation, he knows that it was not a time to do spiritual wrestling Jacob-style. It is simply to answer God as plainly and as honestly as possible. Without God's wisdom, we are nothing.

Second, know the need. It takes a discerning heart to know the need for discernment. Can we say Solomon had no wisdom before his asking? Surely not! He has wisdom, and learning to depend on God is a demonstration of wisdom itself. After all, Proverbs 1:7 teaches us that "The fear of the LORD is the beginning of knowledge, but fools despise wisdom and instruction." Likewise, it takes a prayerful person to continue to learn about prayer and praying. Prayer is not uttering spiritual words with our lips. It is a disposition of the heart that trust God. It is being mindful of God's will each time we ask. It is letting the Lord guide us in our doing as we relate to him in our asking. The 1 Kings 3 passage records an example of the importance of discernment. 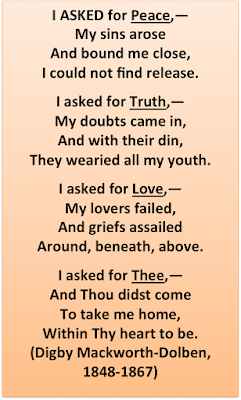 Two mothers were fighting over the surviving child after one of them died when one of them accidentally laid on him. They were living under the same house and were probably related. The Jewish Midrash claims that one of them is a mother and the other a daughter in law. Both their husbands had died and both had claimed ownership of the remaining living child. Despicable it may be, it was a classic test of Solomon's exercise of wisdom. Without the privilege of modern DNA tests or the investigative tools of CSI, Solomon cannot use scientific knowledge or technological knowhow to solve this case. He can only depend on wisdom and keen understanding of people's behaviour. Solving the case is the only thing. It is performing the role as a just and righteous king. It is ensuring that justice is fairly meted out, to find out who is innocent and who is not. With remarkable poise, Solomon orders the baby to be cut into two so that each mother would have half each. Looking at the response of the real mother was enough to tell Solomon the truth. Of course, he did not follow through with the amputation. The order was simply to ease out the truth. Note how one discernment not only saved the child from being wrangled away from the real mother, it gave people confidence to have a wise king. One of the greatest gifts for any nation is to have a wise and just ruler.

Third, know the role. Knowing right from wrong is just one part of wisdom. There is another part. It is what the wisdom is used for. As a king, one of the chief responsibilities is the exercise of justice, which is exactly what the story of the two prostitutes was about, how a king metes out justice. At the same time, justice must go with mercy, which is exactly what Solomon did when he empathizes with both women and their tussle over the living child. That is what government is about: Justice and mercy. Justice without mercy is legalism. Mercy without justice is antinomianism.

C) Asking According to God's Will

There is a fourth element. That is God's Will. In each and every of our requests, we must learn to discern what is God's will. In the prayer of Solomon, he asks for God's will to be done for Israel, as he acknowledges the great people of Israel as given by God. In the same way, the Lord's Prayer does not begin with "Give us this day our daily bread." It begins with hallowing and honouring the Name of God. It ends by declaring the glory of the Kingdom. It continues throughout with mindfulness about God's will be done on earth as it is in heaven. From land to sea, from sea to sky, from people to nations, we cannot flood the gates of heaven with petty requests that only serve self-interests. James 4:3 warns us: "When you ask, you do not receive, because you ask with wrong motives, that you may spend what you get on your pleasures." When we seek God's will constantly, we will not fall prey to selfishness and egotist behaviours. We will seek first the Kingdom of God and His Righteousness, and to trust that God will take care of our everyday needs.

In summary, suppose God surprises us one day with the phrase: "Ask for whatever you want me to give you," may we be aware of our strengths and weaknesses by knowing ourselves. May we know our true need. For what we want is not necessarily what we need. What we need is not necessarily what we want. Only with a humble obedience can we avoid blind spots and the foolish attitude of thinking we know best, when the truth is, God knows best. May we also recognize the responsibility of discharging our roles in society, in family, and in our community. Above all, may God's will direct us to be God's people, doing God's work in God's way.

THOUGHT: "Seek ye first the rule of God," the Master says. And after that? The key that one needs for one's peace is in the heart. There can be no personal freedom where there is not an initial personal surrender." (Howard Thurman, 1899-1981)