Yesterday, I preached about the Great Commission versus the Great Suggestion. It was a call for believers who had gotten their priorities mixed up. While they testify boldly about believing in God as their first priority, their living testimonies say otherwise. By doing so, they affirm the accusations of such people as "Sunday Christians." Personally, I would call such people as leftover believers.

I remember a story of a little boy living with his busy dad. Dad often brought home his work. He worked long hours. He often returned home late and when it came to bedtime reading, he was too exhausted even to spend time with his son. It had cost him his marriage, and due to his earning powers, he was able to gain full custody of his only son. Even at the breakfast table, the dad would be either reading his newspapers or checking his phone updates. As a psychologist, he makes lots of money straight from the top of the hour. He is an important man for patients desperate for help.

One regular morning, after getting another of those feelings of being ignored, the ten year old kid asked:

"Dad, can I ask you something?"

Sipping his coffee cup, dad continued to read and said, "Just give me five minutes."

Five minutes past, seeing his dad still busy combing for information on the newspapers, he decided to wait a few minutes longer before saying, "Dad, can I ask you a question now?"

Finally, the dad was ready. The boy asked: "How much do you earn?"

The boy returned soon and in his hands were coins making up $5. The boy said: "Dad, can I buy 5 minutes of your time?"

You could imagine the tears in the eyes of the father. He had become so caught up with earning and working, that he had forgotten his own priorities. That morning, he realized that by putting all his best energies and time to focus on his work, he had relied on leftover energies and time for his own son. I feel for the boy. Just seeing the father devote his best attention to work makes the boy feel under appreciated and less important than the work. To the boy, making money is primary, time with family is secondary.  I can imagine the boy complaining to his friends:

"My dad is very loving. He spends a lot of time to work and make money for the family. That is really nice of him. But sometimes I wished that I don't always have to depend on his leftovers just to hear him read me a story."

Some people do exactly that when it comes to faith. In Luke 9:59-60, when Jesus called an unnamed man to follow Him, the man's quick reply was: "Lord, first let me go and bury my father."

It sounded like a reasonable request. It can even be a very filial act. The question is, is that the Jewish understanding at that time? Is the father truly dead? If so, should not the man be busy with funeral and burial details rather than simply walking the streets? Should he not be mourning and comforting his family? Is Jesus showing a lack of compassion when telling the man to let the dead bury the dead? Many interpreters say that what Jesus meant was to let the "spiritually dead" bury the "physically dead."

According to Jewish customs, immediately after the burial, the family would separate themselves from public appearances and mourn for seven days. If that was the case, it would be very weird for this man to be walking around in public during this time. That is why I believe that the man's father had not yet died. What the man was actually saying is this:

"Lord, first let me wait until my father had died. Only then can I come and follow you."

In our modern era, we can substitute this for the following:


When the heart is not willing, the list of other things is endless. If we say to Jesus, "Lord, first let me _____, " we are essentially telling Jesus that there is something more important than following Him. For our priorities are our work, our projects, our businesses, our families, and our lives on earth. Jesus only gets to inherit our leftover time and energy. Our minds have become so caught up with the things of the world that we easily forget the promises of heaven. More importantly, we have missed out what it means to follow Christ.

The Bible tells us to wait on the Lord, not make the Lord wait for us.

Do we offer up our best to God, or do we leave behind leftovers to Him? Leftover believers will prefer to put their own priorities above God's. They may claim to follow Jesus, but by their actions, they are making God wait while they busy themselves with their own priorities.

Leftover believers have a tendency to say: "Why me?" when approached to help or volunteer for some community work. They claim that they are too busy or simply had no time to serve. They will be punctual at work and at client appointments, but on Sunday mornings, they arrive to Church late, and will only serve when they have sufficient energy reserves or some leftover time.

Leftover believers will claim that following Christ is most important, but by their actions they betray their words. They will dedicate their utmost attention to the highest paying customers instead of their utmost for God's Kingdom. They justify their personal actions by claiming:

I have a problem with that. Firstly, it dichotomizes work into secular and sacred. All work done for the glory of God is good. All work is sacred when we do it in God's image. All honest work is holy to the Lord. Secondly, the problem with such justifications is that it de-emphasizes the value of work done in Christian communities like churches, para-churches, or religious communities. It is one thing to equate all work as good, regardless of whether it is in the religious or non-religious environment. It is yet another to desecrate the importance of religious work. In the Old Testament, God had a visible way of reminding people the importance of religious work and dedication. That is why He called one tribe out of twelve, the Levites, to be focused on religious work. We may not be called "Levites" per se, but we can participate in the work of the Kingdom of God.

My friends, each of us are called to unique places in this world. We can become so busy trying to make a living that we can easily forget the importance of making a life. I suppose that is another way of understanding Jesus' words to the man wanting to bury his father first. For the man's desire to bury his father first is used as a way to describe man's fascination with the world that the world now is bigger than the world to come. It speaks of a temporal that overshadows the eternal. It turns the affairs of man into something that is bigger than the concerns of God. How can that be? 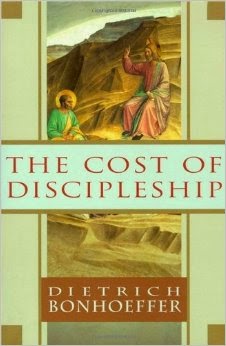 Those who want to follow Christ must remember that priorities are not just spiritual words but our physical responses as well. Let me close with the words of Dietrich Bonhoeffer, who warns us about hoarding our possessions, our time, and our earthly resources.

“Earthly goods are given to be used, not to be collected. In the wilderness God gave Israel the manna every day, and they had no need to worry about food and drink. Indeed, if they kept any of the manna over until the next day, it went bad. In the same way, the disciple must receive his portion from God every day. If he stores it up as a permanent possession, he spoils not only the gift, but himself as well, for he sets his heart on accumulated wealth, and makes it a barrier between himself and God. Where our treasure is, there is our trust, our security, our consolation and our God. Hoarding is idolatry.” (Dietrich Bonhoeffer, The Cost of Discipleship,  New York, Touchstone, p175)


Beware of idolatry which often masquerades in the things we give our priorities to. When we give God only our leftovers, we are guilty of giving our allegiances to other things, not God.