"Also, seek the peace and prosperity of the city to which I have carried you into exile. Pray to the LORD for it, because if it prospers, you too will prosper." (Jer 29:7)

Just last week, we hear of the terrible shooting of the Malaysia Airlines jetliner (MH17) over the land of Ukraine. It was a horrible act of violence inflicted by people engaged in the civil war going on in Ukraine. Standing in solidarity with the families of the victims, the employees of Malaysia Airlines, the people of Malaysia, the Internet is rife with show of support as well as anger against the violence. One such site is the Facebook page called "A Fly Guy's Cabin Crew Lounge" which has become a popular platform for airline workers from all over the world to extend their show of support. There were many moving messages of goodwill and love shared. Words such as "Rest in Peace MH17," "We Pray for MH17," "_____ Airways Love Malaysia Airlines," and so on, provide a small semblance of the positive side of humanity. Then two more disasters further clouded the scene. Calling it a "very bad week" for the aviation industry, news sites reported yet another two more crashes. On Wednesday, a TransAsia Airways plane crashed in Taiwan amid stormy weather killing 48 passengers. On Thursday, Air Algerie flight AH5017 crashed in Mali, killing 116 people. We stand in solidarity with those who have lost loved ones, employees who have been shaken up by the terrible tragedy, and all who feels unsafe to fly. It is human to feel vulnerable. It is also human to try and support one another.

B) War in Gaza

Then there is the escalating war between Israel and Hamas in the Gaza strip, arising from tit-for-tat actions triggered by the murders of three Israeli teenagers. With the death toll rising for both sides, tensions remain high and the media wars continue to be fought all over the Internet, news agencies, and in the political arena. There seems to be no end in sight. Of course, among the many victims and people displaced by the war, many are Christians who are often disadvantaged whenever there is a war triggered by any side. That is why we need to be careful when reading about the events being reported. My rule of thumb: Always read news from both sides in order to see a fuller picture. There will always be some bias in any reporting. For example, in one news report, Israel was singled out for mention in a hit on a hospital. Yet, in another report, Israel claims that terrorists have occupied an empty hospital, and that Hamas are using human beings as shields.

It is hard to tell who is right and who is wrong. If you are a Palestinian sympathizer, you will probably be screaming at Israel to lay off their assault. If you are pro-Israeli, you will point a finger at who fired first. For the rest of us, are we going to take sides? Personally, I want to stand in solidarity with people, the people that Jesus had died for, the people that God loves in the first place. He loves all people and is saddened by the way the people are fighting each other.

We stand in solidarity with human beings, not just those caught in the crossfire, but also with basic human sense for all warring factions to see the sanctity of life more important than the rights of political ideologies. 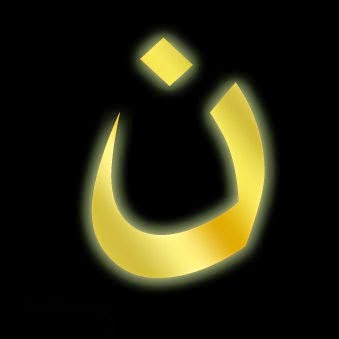 Over in Iraq and Syria, there is a religious persecution going on that is far less reported compared to MH17 or the wars in Gaza, there is a silent threat on Christians living in the land being occupied by the militant group called, Islamic State of Iraq and Syria or ISIS. The Arabic symbol on the right is "nun" (pronounced 'noon') for Nazarene. In trying to differentiate Christians from Muslims, militants have painted the sign on houses and buildings occupied by Christians. It reminds me of how Israel painted their homes with the blood of the lamb so that the angel of death will passover their homes and spare the lives of the firstborn child. In the case of the "nun" symbol painted all over in Mosul, the radical Muslims are trying to flush out the Christians by giving them an ultimatum: Convert to Islam, pay a tax, or suffer death.  (You can read more about this in the article here.)
Of course, there is a fourth option, that is to flee, which is exactly what is happening. Churches are being destroyed. Families are displaced. Important religious artifacts and buildings are razed to the ground. Some Muslims have stood in solidarity with Christians over these senseless acts.This is persecution. There is also a report on the seven terrible countries for Christians to live in.

D) Solidarity with the Persecuted

Many of my friends have show forth their solidarity with the persecuted Christians in Iraq. They do so by being ready to identify themselves openly as Christians. We can do the same by wearing the symbol of "nun," the very same symbol the ISIS militants have used to distinguish Christians from Muslims. Interestingly, the Christians in Iraq are in quite a similar position with the Christians in Palestine. Whether the war is between the US and terrorists in Iraq, or between Israel and Hamas, the Christians living in the lands bear the brunt of the violence and fallout. As I think about Iraq, I feel that as long as there is political instability and social unrest, things are going to get worse for all. When we stand in solidarity with people in general, let us differentiate the terrible violent acts from the people. While we want to stand for the victims, we also pray that good sense will prevail among all leaders, otherwise the tit-for-tat actions will spiral out of control and bring about worse consequences.

In Jeremiah 29, despite being carried away to exile, Judah was urged to pray for the peace and prosperity of the city there. The basic idea is that if the city prospers, the people there will also prosper. This is the way Christians ought to live as resident aliens on this earth. We need to pray for the peace of nations we live in, and that wisdom be the guiding light for rulers and leaders of each state.

It's time to say, "Enough is enough." Do not let guns, bullets, and missiles lead the way. Let vigorous peacemaking be the leading principle.

THOUGHT: “I destroy my enemies when I make them my friends.” (Abraham Lincoln)