"Fathers, do not exasperate your children; instead, bring them up in the training and instruction of the Lord." (Ephesians 6:4)

MAIN POINT: We raise teens in a Social Media world by first becoming eReady parents ourselves. A lack of understanding is a major cause of parents exasperating their children.

You have heard it all before. Statements that reference young people as being addicted to electronic games, computers, video gaming, and electronic gadgets. Now, we hear parents complaining about their teens getting hooked on social media such as Facebook, Twitter, and so on. Adults say that the children are wasting time on the Internet. Teens argue saying that it is the way of life for them. Adults insist on doing some kind of monitoring of their children's activities online. Teens say that the Internet is part of their whole education process. Adults assert the problem of distractions in the new e-media. Teens rebut by saying they are able to multitask very effectively. It is a familiar pattern. Parents push. Teens push back.

The Internet has changed the world. The bludgeoning world of social media is set to change the world even more. As Facebook prepares to launch its first initial public offering, pundits are betting on how much the value of the company will be. According to ComputerWorld, Facebook may be one of the largest IPO in the history of the American stock market. With an estimated 800 million user accounts, Facebook is the face of the Internet today. Even the traditional stronghold of emails is being threatened. One European technology company, Atos,  has even eliminated emails, in favour of the new media such as social media. After all, it is easier to locate friends on Facebook than to search Google for them. Like it or not, social media is here to stay. The question is: "What are the implications for our relationships?"

This week, I want to suggest five ways that parents can adopt to connect with their teenagers. Every effort to connect is an act of love. Every effort not to connect breeds distrust. For parents, understanding our children is a major first step toward connecting well.

A) Understanding the Teenager Mind

One of the ways to get into the head of a teen is to quickly recall how we behave when we ourselves were teenagers. Remember how rebellious we were? I do. I remembered how angry I was at my father who refused to let me play ball. It even led to a swearing incident which was totally uncalled for. Looking back, I was embarrassed even to just think about it. Playing ball back then is no different from playing games on computers or video games now, or interacting compulsively on social media. Firstly, acknowledge that the online world has both pros and cons.

"While the Internet has the potential to isolate our teenagers, it can also extend their community. Cyberspace could encourage them to become self-absorbed narcissists, but it can also help them become caring citizens of the world. Living online could potentially turn them into shallow thinkers, but it can also help them problem-solve and multi-task." (Lyndsay Green, Teens Gone Wired: Are You Ready?, Markham, ON: Thomas Allen Publishers, 2011, 4)

This attitude of holding both views together is a realistic position to begin with. We do not want to dismiss the benefits of the social media. At the same time, we want to be responsible to guide our teenagers appropriately. This spirit is evident in Paul's letter to the Ephesians. On the one hand, children are to obey their parents (Ephesians 6:1-2). On the other hand, parents are not to exasperate their children. Respect operates both ways, not necessarily as equals, but as co-partners of family living.

B) Ask, Not Assume with Condescension


Such statements exasperate teenagers a lot. It makes them feel like fools and good for nothing blokes. Instead of such things, why not simply ask: 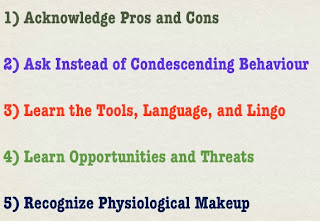 C) Learn, Not Be Ignorant

Thirdly, it is better to learn the new tools, languages, and the mediums instead of brushing them aside into the pool of ignorance. One of the things my teens tell me is about the use of emoticons and abbreviated words when I am texting on my phone. They tell me that fully formed sentences in the texting world comes across as 'stern' or 'angry' moods. They ask me to use words like 'lol,' or use smileys to end my texts. Instead of "Can you come to the library after school?" as a text message, I am encouraged to text like a teen:

I have tried and it worked wonders. While language purists will be annoyed by the language adopted in the social media world, twitter like language, emoticons, and short forms, are the alphabets of the social media generation. The simplicity, the brevity, and the efficiency of compressing thoughts and sentences into a 140-character limit phrase is compelling. It fits into the social media enthusiast's mindset of minimal words for maximum effect. Teens may not talk a lot, but they can surely tweet a lot. This means that parents ought to be assured even when their teens are not speaking a lot. They are still communicating, albeit in a different way. If we want to talk to them, learn the tools.

D) See Opportunities instead of Threats

Fourthly, parents can play a major role in their parenting of teens by learning to hold both opportunities an threats of social media in perspective. Learn to see opportunities as well as threats in their respective contexts. It is often very tempting for parents to brush off their teens with a generalized statement like:

The threats are real. Let us not overstate their threats or undermine their danger. Maybe, when we parent teens, it is less of telling them what to do or what not to do, but more of guiding them. Share with them our experience, only when asked. Talk to them in their world. Relate to them as growing adults. Treat them respectfully, even though they may be rude or dismissive. Perhaps, the most important role a parent can do is to show (not tell them) them how to be an adult. Understanding and trust makes for great parenting companions. One parent says:

"I adopt a two step process when parenting teens. Firstly, I always try to see things through the eyes of a 13-year old. Then, I act like a parent. Understanding precedes good parenting."

Finally, there is also a neurological aspect of teens, in both girls and boys. The psychiatrist, Louann Brizendine writes:

"Many girls turn to drugs, alcohol, and food (either they'll stop eating or they'll binge) when they're under stress. As a parent of teens, you have the job of ignoring much of what they say. Don't take any impulsive or emotional tirades seriously. Stay calm. Teens state their intentions - and feel them - with such passion that you can be persuaded in spite of yourself. Just remember, your teen daughter's impulse-control circuits can't handle the input. Like it or not, you must provide the control while her brain cannot." (Louann Brizendine, The Female Brain, New York, NY: Doubleday, 2006, 52)

One last thing. What about teens who apparently spend more time playing games than working on their school projects? Ana Homayoun suggests tips like better organizing of time, tips on how to study, allocating Facebook time AFTER homework time, and setting personal goals. She suggested parents and teens agree on scheduling both homework time and facebook time. A six hour project can be broken down into four chunks of 90 minutes each, spread out with Facebook time.

"Not only is it important to break up the projects and preparation into smaller manageable tasks, it is also crucial to create breaks when kids can do something fun and stress relieving. Time the breaks so that for every few hours spent studying they have twenty to thirty minutes to completely free their minds and do something entirely unrelated to school." (Ana Homayoun, That Crumpled Paper Was Due Last Week: Helping Disorganized and Distracted Boys Succeed, New York, NY: Pedigree Books, 2010, 133)

Parents, let us not exasperate our children. Instead, let us aim to understand that their world is different, and social media contains both pros and cons. Let us stop any condescending behaviour and humbly adopt an attitude of asking to learn with them. Let us keep learning the tools of the Internet. Finally, let us keep both opportunities and threats of the Internet in their proper perspectives.

May we all grow to be better parents in an Internet driven, an eReady people who grow with our growing teens.

THOUGHT: "To bring up a child in the way he should go, travel that way yourself once in a while." (Josh Billings)

Copyright by SabbathWalk. This devotional is sent to you free of charge. If you feel blessed or ministered to by SabbathWalk weekly devotionals, feel free to forward to friends, or to invite them to subscribe online at http://blog.sabbathwalk.org . You can also send me an email at cyap@sabbathwalk.org for comments or enquiries.
Posted by Sabbath Walk at 2:58 PM