Left to Our Own Devices

Title: Left To Our Own Devices
Written by: Conrade Yap
9 Mar 2010


"Yes, they knew God, but they wouldn't worship him as God or even give him thanks. And they begin to think up foolish ideas of what God is like. The result was that their minds became dark and confused." (Rom 1:21, NLT)

Tiger Woods is a world-class golfer. John Terry is a famous footballer with the popular English club, Chelsea. Jack Neo is a famous South-East-Asian filmmaker-entertainer. Despite them located on three different continents, they share something in common. All of them have secret affairs. All of them are married men, sleeping with other women. This week, the popular and successful filmmaker in Singapore, Jack Neo has his photos and his sexual trysts become headline news all over the region. While Neo and his family are currently hiding from the press, details of his affairs are showing up in many places. The man who started with humble beginnings, who have enthralled millions of television viewers with his versatile acting is now fleeing from publicity. Like Tiger Woods and John Terry, this time, Neo has dethroned himself. Positive feedback about him and his character are getting less while negative and verbal jibes are getting more. It saddens me to read that Neo has not only committed adultery, he has damaged his testimony for God. Worshipping in one of the largest Churches in Singapore, his actions have become a stumbling block to others, a disappointment to many.

Sigh. Such news are not new. In North America, sexual scandals are one of the most read news in any media. Many are already exposed. Many more are yet to be discovered. Still, if any affair by a famous politician, movie star, singer, or a celebrity is leaked, rest assured that the press would soon be on a news feeding frenzy. Whatever they write, people read. Whatever they publish, people buy them. Right now, the German Catholic Church is also reeling from revelations of another sex scandal. When will all these end? In this week’s edition of Sabbath Walk, I want to ponder on what it means to be left to our own devices.

Key Point - “Left to its own devices and schemes, the human heart becomes an idol factory.”

A) Separation of Sex and Spirituality - The Factory Starts Work
The Quaker, Richard Foster laments: 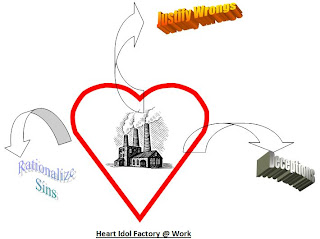 “One of the real tragedies in Christian history has been the divorce of sexuality from spirituality. This fact is all the more lamentable since the Bible holds such a high celebrative view of human sexuality.”
(Richard Foster, The Challenge of the Disciplined Life, Harper San Francisco, 1985, 91)

Foster notices an important aspect of being human. Hell breaks loose when human sexuality is separated from spirituality. The fallen human condition is like an aimless kite. Without it being fastened and held by a firm hand, it is susceptible to winds coming at it from all directions and speeds. The moment the hand releases the kite, the kite will be soon be lost. Ask any kid who lost his favourite kite. Reflecting on the effects of Money, Sex, and Power, Foster, argues cogently that any view of sexuality without spirituality is incomplete, utterly incomplete. In other words, man without God is hopeless. Man trying to live without obeying God's instructions render him helpless. Sad is the man who though incomplete, behaves as if he is completely right. That is self-righteousness. Even more tragic is the sinner , who rationalizes himself to justify all means to achieve his ends. That is unrighteousness. They blame others. They blame things outside their control. They blame all else except themselves. Some even blame God. When we are separated from God, and left to our own devices, to do whatever we want, anything can be rationalized. Left to our own devices, the human heart begins manufacturing idols.

B) Manufacturing Sin after Sin
One incomplete state begets another. They compound one’s sin and mistakes. Worse, they rationalize and try to give excuses to justify their behaviors. When pushed to a corner, some hardcore sinners will change from a defensive posture to an offensive gesture. They fight back when they refuse to be cornered about their sin.

I learned many years ago when I was in business school that man is not exactly a ‘rational’ creature. Instead, man is a ‘rationalizing’ creature. There is a subtle difference between ‘rational’ and ‘rationalizing.’ The former sees them as always doing the right thing. The latter thinks he is doing the right thing all the time. The trouble is, when people forget they are sinners in the first place, they pride themselves in all the decisions they make. What were Woods, Terry and Neo thinking just before their first sexual fling? I suppose that not getting caught the first time, tempts them to continue their affairs indefinitely. Left to our own devices, the sinful heart manufactures sin after sin.

C) Manufacturing Reasons to Justify Sin
People find ways and means to justify their plans and their actions. In business, when a greedy person has set his heart to grab a lucrative deal, he will find all ways to justify his actions, to make things happen according to his plans. When getting the deal becomes the overall objective, the human rationalizing machine kicks into action. When the goal is finally achieved, the very success justifies the means. Sometimes, successes can be a convenient cloak to cover up any unethical practices. Who dares to question the person up there? Who dares to point a finger at a famous boss who can easily take away our livelihood with a simple command? The same is true for those who refuse to acknowledge their sins. The powerful rules, until their sins are exposed. Adulterers can sometimes deceive themselves by rationalizing themselves as follows:


Some of these excuses make me angry. I cannot imagine how can a man who commits adultery, suddenly turns around and blames his wife for own despicable act! Or, how can a woman justify her infidelity by blaming her husband's low esteem for her affairs? The trouble is, when one becomes successful in the eyes of the world, he becomes his own biggest threat. When he or she lusts after something, reasons are concocted simply to get it. When a person is bent on sin, everything else can be used to justify his actions. A person addicted to sexual affairs, blames others except himself. This is because the human heart is a natural and efficient factory of idolatry. Idols are not external things that mysteriously appear outside. They are internal thoughts that gradually form idols in everything we touch. Without God, everything else can become a substitute to replace God. Without God, we are on our own. We form our own ideals. We design our own ends. We manufacture our own gods. Without God, our biggest punishment is not external but internal. Read the judgment.


“So God let them go ahead and do whatever shameful things their hearts desired….” (Rom 1:24a)

Left to our own sinful natures, our heart manufactures rationalizations to justify sin.

D) Manufacturing 'Idols Not Enough'
Let me urge caution. All of us are vulnerable. All of us are susceptible to temptations. In fact, the most dangerous of all temptations frequently begins with an honorable goal: to be successful. It could happen to any of us. The more fame and success we get, the greater the temptations. The important question for all of us is, can we handle success? For those of us who wants success, pray too, that the Lord grants you the strength to fight temptations of success. Another way is to facilitate inner and outer successes. Any external success without adequate moral and spiritual foundations will eventually crumble.

“For all our striving to attain worldly success outside, how much are we achieving INSIDE? (of character, integrity and gratitude)”

In the race for success, people are tempted to become lopsided. They race for worldly success without a corresponding race for inner integrity. They then become easy pickings for the evil one. We build our lives and our future on sinking sand. Doris Mortman shares this wisdom:


“Until you make peace with who you are, you’ll never be content with what you have.”
(Doris Mortman, Circles, Bantam Books, 1988, 45)

Left to our own devices, we manufacture more sins, and more justifications without reservation.

E) Peace with God
True peace cannot be manufactured. It can only be received and practiced. Indeed, I suggest something more than simply 'making' peace. We need peace from God. We need peace with God. We need God urgently, more so because we are already fallen creatures prone to sin more and more. Left to our own devices, our hearts manufacture deceptions. With God as our peace, we say a defiant ‘NO’ to worldly temptations, no matter what good they entice us with. We say YES to God, no matter what it costs us. Instead of being left to our own devices, we pray that God will not leave or forsake us. We ask humbly for God’s help. We seek to store up eternal treasures in heaven instead of accumulating temporal treasures on earth. Then, and only then, we slow and shut down our inner heart that manufactures idols, to turn it into a heart that bears good fruit for Christ. Replace our heart of idols with a heart for God. Then we can be strengthened to flee from sexual sins. We can be strengthened to speak out against sins, especially our own. We can be strengthened to banish self-deception. We can be strengthened to shut down our idol factory, with God’s strength. In idols we distrust for, in God we will trust. May God be merciful to us, not to leave us to our own devices.

There remains the best and only way to shut down our idol factory once and for all. Say to ourselves: "The LORD is my Shepherd; I shall lack nothing." (Ps 23:1)

Thought: “In mathematics, an integer is a number that isn’t divided into fractions. Just so, a man of integrity isn’t divided against himself. He doesn’t think one thing and say another – so he’s not in conflict with his own principles.” (Arthur Gordon)


Copyright by SabbathWalk. This devotional is sent to you free of charge. If you feel blessed or ministered to by SabbathWalk weekly devotionals, feel free to forward to friends, or to invite them to subscribe online at http://blog.sabbathwalk.org . You can also send me an email at cyap@sabbathwalk.org for comments or enquiries.
Posted by Sabbath Walk at 2:48 PM